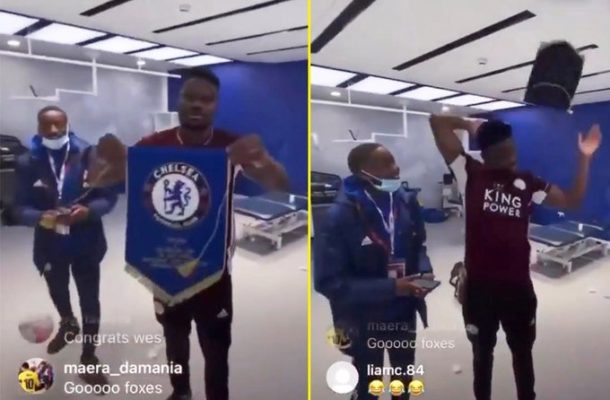 Ghanaian defender Daniel Amartey has been accused of showing gross disrespect to Chelsea after a video of him emerged tossing away the Chelsea pennant after his side 1-0 victory.

Amartey is seen picking the Chelsea pennant from the table and throwing it behind him.

The video has generated a lot of talk with most Chelsea fans bashing him for being disrespectful for his act.

The defender was an unused substitute as his side lifted the oldest cup competition in the world for the first time and becomes the third Ghanaian after Michael Essien and Sulley Muntari to win the FA Cup.

Youri Tielemans produced one of the great FA Cup final goals to give Leicester City the trophy for the first time in their history with victory over Chelsea at Wembley.

The Belgian settled a closely contested encounter with a spectacular right-foot drive that flew beyond Chelsea goalkeeper Kepa Arrizabalaga into the top corner from 25 yards in the 63rd minute.

It sent manager Brendan Rodgers racing down the touchline in celebration although Leicester's fans - inside Wembley as 21,000 supporters formed the biggest attendance since lockdown - had to survive a nerve-jangling closing phase before they could celebrate the win in their first final since 1969.

The Foxes were indebted to two crucial saves from keeper Kasper Schmeichel, who turned former Leicester defender Ben Chilwell's header on to a post then produced an even better stop to turn Mason Mount's powerful shot wide.

And in a final act of drama, Wes Morgan bundled into his own net following a last-minute goalmouth scramble before it was ruled out by the barest of margins following the intervention of VAR.
VIDEO BELOW: