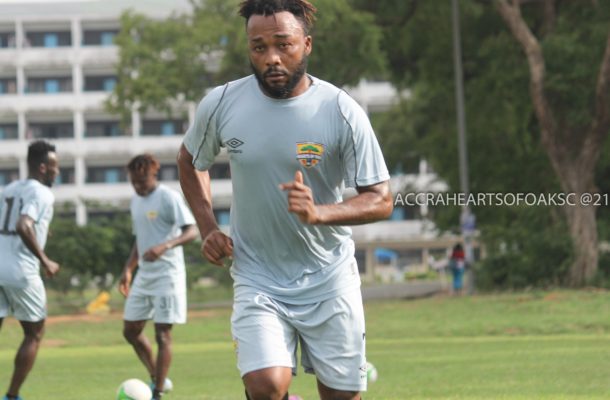 Hearts of Oak midfielder Glason Awako has made a return to the club for the first time since leaving training abruptly in September.

The player on Tuesday morning began training with the Hearts of Oak youth side Auroras at the St Thomas Aquinas Park and is expected to join the main team if he regains his fitness.

The midfield maestro joined the Ghana Premier League champions from rivals Accra Great Olympics barely three months ago on a two year deal but decided to run away from the club for reaasons best known to him.

Awako has not been training with Hearts for some time now and told the management and board of the club that he can no longer play for Hearts.

According to reports, the player has never known peace since signing for Hearts of Oak and has been under constant spiritual attacks and cannot even sleep.

Although the midfielder has never come out to state reasons why he has decided to abandon the contract he signed with Hearts of Oak some months ago.

This follows an arbitration brokered by a Ga chief from Teshie,  Teshie Gbugblah Oblahiaaa Mantse (Youth Chief), Original Nii Martey Laryea I where the former Great Olympics player hails from.

VIDEO OF AWAKO TRAINING BELOW: