VIDEO: JHS pupil who ‘committed suicide’ buried with a cutlass 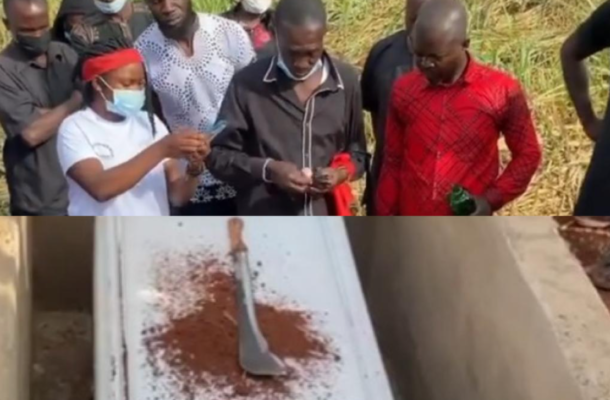 The family of 14-year-old final year pupil, Leticia Kyere Pinamang, who allegedly committed suicide, has buried her with a cutlass to avenge her death.

During her burial over the weekend, the elders of the family were captured invoking curses and pouring libations to appease gods who they claim will avenge the death of their beloved family member.

According to the distressed family members, they have since suspected foul play in the death of the 14-year-old, who until her demise, was afinal year pupil of Miracle Educational Academy Junior High School in Sunyani.

Meanwhile, a Senior Specialist Pathologist at the Komfo Anokye Teaching Hospital has described the death of a 14-year-old final year pupil as unnatural.

The pathologist, Dr Ernest K. Adjei, said she died as a result of asphyxia (suffocation) through hanging rendering it unnatural.

She was found hanging on a rope tied to a crossbar holding the ceiling joints at the school’s dining hall about 6:30 p.m. on Monday, May 17, 2021, while the pupils had converged on the school’s church auditorium for Bible studies.

Authorities of the school had said that she left the Bible studies session — the last time she was seen — before her body was found hanging.

A note found on the deceased after her alleged suicide read: There is so much sorrow and pain in my heart.