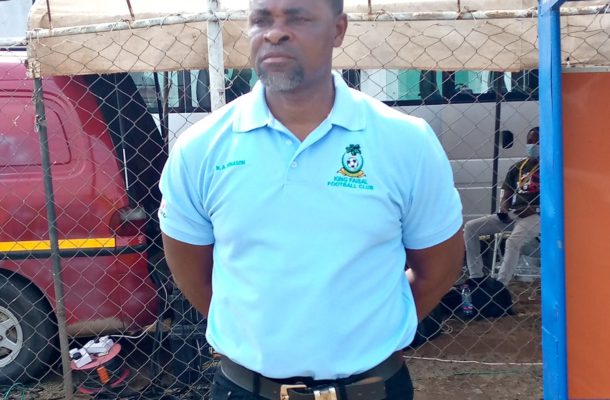 Coach of embattled King Faisal Andy Senason was elated after his side brave the odds and overturned an unthinkable 3-0 first half lead into a 4-3 win.

Kumasi King Faisal on Saturday came from three goals down to record an impressive 4-3 win over Berkum Chelsea at the Ohene Ameyaw Park in Techiman.

The Insha Allah boys went down three nil in the first half but rallied back and got a win with an impressive fight back.

Paul Attah Adjei opened the scoring for Berekum Chelsea in the ninth minute with the first shot on target in the game after some lax defending from King Faisal.

The away side added the second goal in the 13th minute after Stephen Amankonaa hit a plie driver of a shot.

Paul Attah Adjei scored his second goal of the game with a beautiful strike as Berekum Chelsea went 3-0 up.

Frimpong Boateng scored for King Faisal before a hat trick from Kwame Peprah overturned the three nil deficit for the home side.

Speaking after the game the coach was full of praise for his charges  for the historic feat chalked.