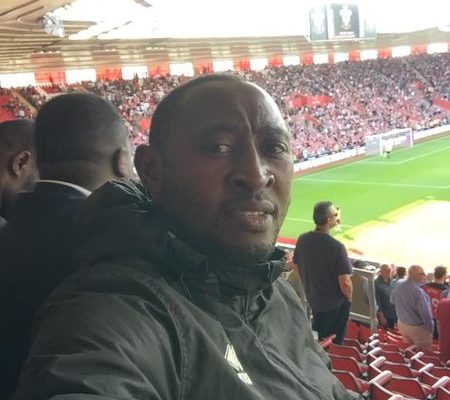 Kumasi Asante Kotoko duo of David Obeng Nyarko and assistant coach Abdulai Gazale were in the stands on Sunday when Southampton lost at home to Wolves at the Saint Mary's.

The Mexico forward grabbed the only goal of the match when he collected a long ball forward, showed great skill to evade two home defenders and finished calmly past Alex McCarthy.

After Jimenez's goal, his first for Wolves since October 2020, the Saints had a chance for an equaliser but Che Adams' shot was saved and despite late home pressure, Wolves held on for the win.

Southampton remain without a Premier League victory this season and drop to 16th, while Wolves move above them up to 13th. The Kotok duo are in the England for an attachment with Southampton and started last Tuesday.

They will be undergoing a one month attachment with the English Premier League club who have a partnership agreement with the Ghanaian giants.

Kumasi Asante Kotoko officially appointed David Obeng Nyarko as the club's new Communications and Brands Manager on 9th September,2021 after acting in that capacity since the departure of Moses Antwi Benefo who was in that role.

Until assuming the role of acting Communications Director of the club he was the Special Assistant to the Chief Executive Officer(CEO) of the club.

Abdulai Gazale is expected to head the Kotoko youth set up upon his return to the club as David Ocloo and John Eduafo has been appointed as new assistant managers to new coach Dr. Prosper Nartey Ogum.