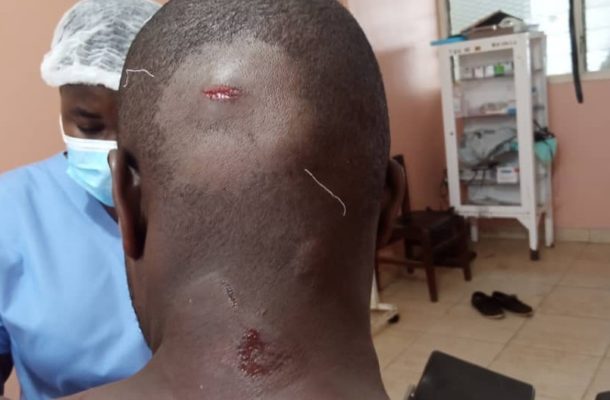 A military man was nearly killed by land guards at Adjen Kotoku in the Ga West Municipal District of the Greater Accra Region Monday, March 8.

Topstories.com.gh reported that the heavily armed men invaded the property belonging to the military man at Akotoshie Number1 near ‘Rush Energy Drink’ at around 1pm and demanded to see the owner of the land.

The criminals bullied the soldier, slashed his head and body with machete, beat up the labourers and inflicted deep wounds on their bodies.

Aside the murderous attack, the land guards destroyed the windscreens of the vehicle belonging to the soldier, robbed him of his money – over Seven-Thousand Ghana Cedis (GHC7,000).

They also seized the soldier’s gun and mobile phones belonging to the victims.

According to one of the victims, while they [labourers] were busily working, the about 60 land guards stormed the site and after committing the crime, they asked the military man to visit the chief of Chinto.

More in the video attached: