VIDEO: Majeed Ashimeru sees red for Anderlecht after Luis Suarez like handball save on goal line 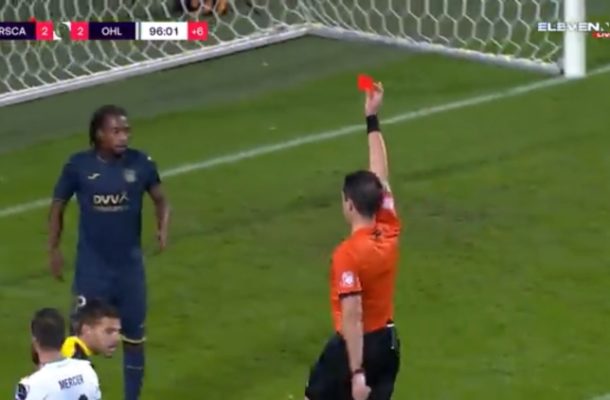 Ghanaian midfielder Majeed Ashimeru was the villain for supporters of Belgian Jupiler Pro League side OH Leuven but was a hero for Anderlect supporters as he re -enacted a copy cat of the famous Luis Suarez dive that denied Ghana a place in the semi finals of the World Cup when he cleared a goal bound shot with his hands.

Anderlecht played at their home grounds the Lotto Park against OH Leuven in a league game on Sunday with the away side opening the scores of the game as early as the 6th minute with Sory Kaba the goal scorer.

Matheu Maertens added the second goal for OH Leuven in the 15th minute before Anderlecht responded with a goal from Joshua Zirkzee in the 40th minute to make it 2-1.

Deep into stoppage time Joshua Zirkzee made it 2-2 for the host to make it 2-2.

The Ghanaian midfielder climbed off the bench in the 77th minute of the game and palmed away a goal bound effort in the 96th minute to deny OH Leuven all three points as the penalty awarded them was missed by Guinean striker Sory Kaba although the midfielder was shown a red card.