VIDEO: MP storms Parliament in the company of his 4 wives, 27 children 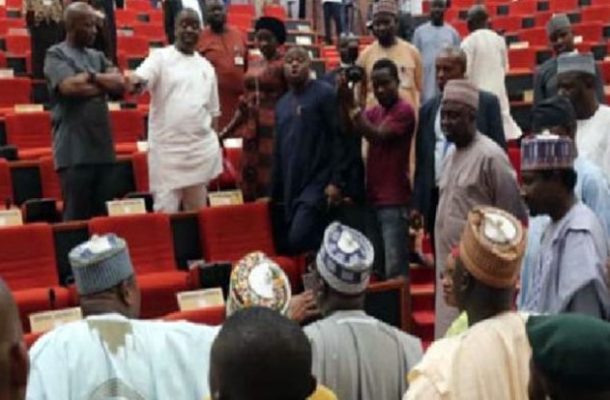 Speaking on the floor after his swearing-in, he asked his four wives to stand up

Nigerians are reacting to a video posted online of an MP who attended a parliamentary session with his four wives.

Alhassan Ado Doguwa, who is the majority leader in the lower chamber of the national assembly, boasted on the floor of the House of Representatives that he was “so powerful both at the parliament and back at home”.

A tweeter shared a video of his comments:

Mr Doguwa was marking his return to parliament after winning a by-election in the northern Kano state.

His win in the March 2019 general election had been nullified by an election petition tribunal over irregularities.

Speaking on the floor after his swearing-in, he asked his four wives to stand up.

“Mr Speaker, I would like to let you know that with me today here are my four respected wives, Halima can stand up, Umma stand up,” he said amidst cheering and applause from his colleagues.

“And one other reason [is] to let you know that when members call me a powerful man, I am not only powerful on the floor of the house, I am also powerful at home… because I deal with four wives,” Mr Doguwa said.

The statement has divided opinion in the country, with some supportive and others critical of polygamy.

The practice is common in the Muslim-dominated north, where Mr Doguwa comes from.

Recently, the Emir of Kano, former Central Bank governor Sanusi Lamido Sanusi, was criticised after saying polygamy was “causing poverty and backwardness” in the northern part of Nigeria.