VIDEO: No Chief will allow galamsey to take place in his area - Tepa Manhene Sumankwa 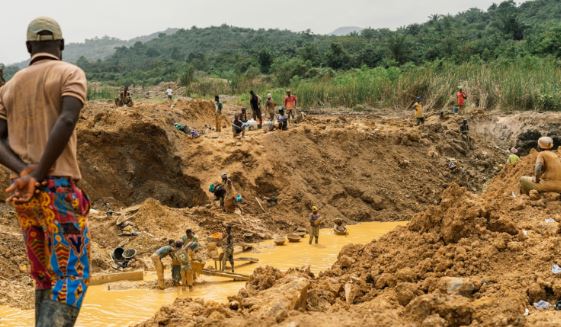 The Tepamanhene Sumankwa, Nana Poku Tuffuor says that no chief in Ghana will deliberately permit illegal mining in his jurisdiction. Nana Poku's remark is in response to the various accusations leveled against chiefs for allowing galamseyers to destroy lands under their control.

Speaking in an interview with a YouTube channel MAK TV GH, the Tepamanhene Sumankwa reiterated that Nananom(chiefs) will not sit aloof for illegal miners to deplete their lands.

However, they do not have the power to grant permits to those miners.

Although the miners approach the chiefs before they carry on with their work, they do not tell Nananom that they're going to embark on a galamsey.

"Nananom don't have the power to give permits to miners."

"Though the miners approach Nananom alright, they don't tell us exactly the type of mining they will undertake. As a result, before you realize it, they had destroyed the land."

He declared that Asantehene Otumfour Osei Tutu II has given chiefs a mandate to punish anyone who would be found culpable of galamsey.

According to him, Nananom will do everything possible to eliminate illegal mining in their communities.  watch video below