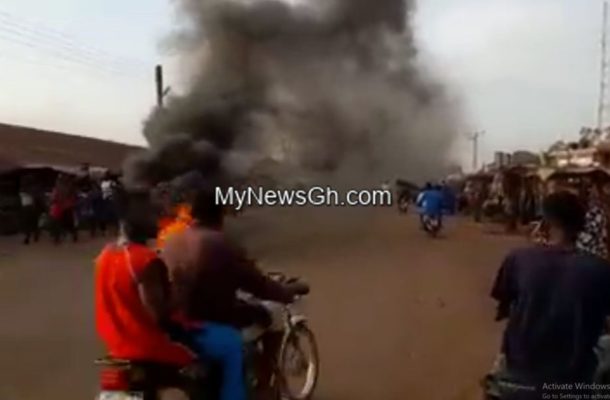 Some members of the governing New Patriotic Party(NPP) on Thursday, April 15, 2021, took to the streets of Yendi to register their displeasure over the exclusion of their Member of Parliament(MP) Alhaji Farouk Aliu Mahama from the Deputy Ministerial list.

They blocked roads, burnt lorry tyres chanting war songs with placards accusing President Nana Addo Dankwa Akufo-Addo of btraying the Yendi Constituency that has given him so much hope.

Though there is yet to be an official communication from the presidency on Deputy Ministers, various lists are making the rounds on social media suggesting persons contained in them are to be appointed.

As a result some members of the NPP in the Yendi Constituency went berserk accusing the President of trying to destroy the party before the second term.

“We are the NPP and we deserve better. No NPP MP has come from here and not given a ministerial position. Appoint Alhaji Farouk as Minister and not shortchange us considering the margin he won for you in the 2020 elections. Make him a Deputy Minister so he can also take care of us”, they disclosed.

In December 2020, Alhaji Farouk Aliu won the parliamentary elections for the Yendi Constituency. He was declared winner after getting 40,624 votes against his closest contender Alhassan Abdul Fatawu of the National Democratic Congress (NDC) who had 24,755 votes.

The son of the former Vice President took over from Mohammed Habib Tijani, a former Deputy Minister for Foreign Affairs under the Akufo-Addo government, who had been Member of Parliament since recapturing the seat for the New Patriotic Party in the 2012 elections but rather decided not to contest in the 2020 elections.

Yendi Constituency gave the President in the 2020 elections over 40,000 votes to mandate him a second term in government indicating that this will not be in vain considering how passionate he is about the development for the area.