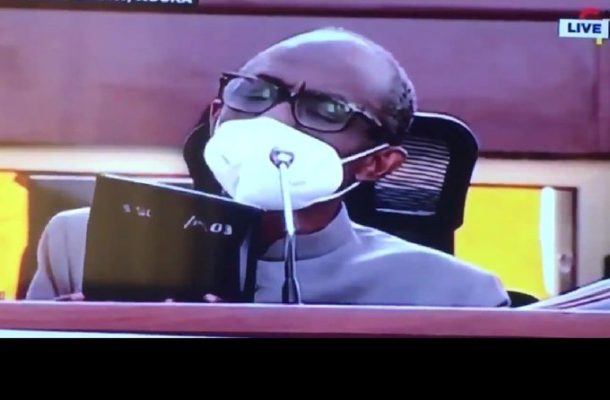 Jonhson Asiedu Nketiah in the witness box at Supreme Court

The social media handle of the National Maths and Science quiz have joined in poking fun at the General Secretary of the National Democratic Congress (NDC), Mr. Johnson Asiedu Nketiah.

General Mosquito is one of two persons who have filed witness statements at the Supreme Court supporting the petition filed by the NDC Presidential candidate, John Mahama in the last Elections.

Johnson Asiedu Nketiah on Friday 29th January,2021 mounted the witness box at the Supreme Court for cross Examination from lawyers of the first and second respondents.

During the cross examination, counsel for the first respondent, lawyer Amenuvor asked the witness to make some deductions from their alleged vote padding by the EC.

Amenuvor: “We are using the numbers that you have brought to the court and I am saying that the total of 4,693 is what you have put down there, is that correct?”

In his answer, the NDC chief scribe said: “I brought it as a sample. In my statement, I did indicate that this is from a sample of this particular constituency. I don’t understand sample to mean a total of the population.”

Nketiah: “With all due respect, I don’t see the point of the question”.

Amenuvor then comes in to say “with the greatest respect, you are being rude to the court not me.”

“Come again (with your question),” Nketiah then asked of the lawyer for the EC.

In adding to the fun someone added the theme song for the popular problem of the day during the Science and Maths Quiz to the video which General Mosquito is doing the calculation in the witness box at the Supreme Court.

The NSMQ Twitter handle quickly deleted the tweet after some obvious backlash but below is the video they posted.