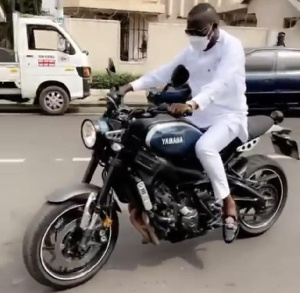 Dr. Osei Kwame Despite on a motorbike

Business mogul and owner of Despite group of companies, Dr. Osei Kwame Despite has stunned Ghanaians after a video of him riding a motorbike surfaced online on his birthday.

Many netizens expressed their admiration for his humility and greatness as he celebrated his birthday in style on 2nd February, 2021 with few friends and family gathered at his East Legon mansion.

Many social users wondered why he would pack all his luxurious cars and ride on a motorbike, with some deducing from his act of riding the motorbike as unique and humbling.

Some Ghanaian celebrities notably Sarkodie, Yaw Sarpong, Abeiku Santana, Diana Hamilton and others were present to grace the occasion, Sarkodie upon touring Despite’s garage revealed how inspired he was.