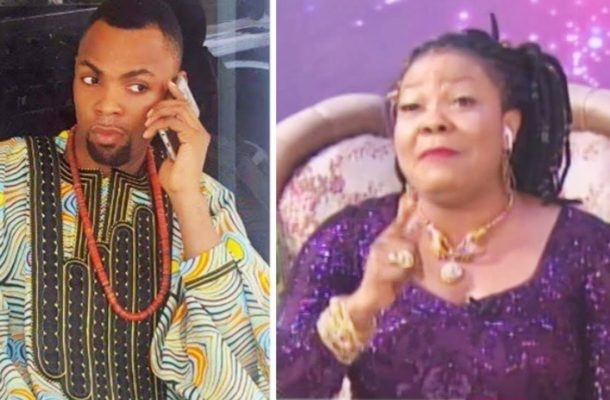 Pastor and founder of Anointed Palace Chapel, Rev. Obofuor, who is currently in a spiritual beef with fetish priestess, Nana Agradaa, has vowed to take her on following her consistent attack on his family.

The two persons in question have recorded a couple of videos where both parties were heard raining insults, curses, and levelling allegations against each other.

In one of Rev Obofour’s videos sighted by GhanaWeb, he described Nana Agradaa as an 'Ashawo’ translated in English as a prostitute.

Dedicating the popular song ‘Ashawo’ by Nigerian musician Flavour, the preacher said that he was going to deal with Nana Agradaa as his wife will not respond to any of the false accusations levelled against her.

“It was my name that attracted people to you. You should show some respect, you thief. I won't allow my wife to speak, I will deal with you. Ashawo,” said Rev Obofour.

Queen Ciara, wife of the preacher was also heard backing her husband as he sang the songs “Move Bitch Get Out Da Way” by Ludacris and Flavour’s “Nwa Baby”.

“Your daughter has gone mad but you have kept her in the house all this while. Why can't you heal her, if you claim you have a god then heal her,’’ he challenged Nana Agradaa.

The man of God in a previous video revealed that he has been cautioned by his spiritual father, Reverend Owusu Bempah to seize fire but from all indications, it seems their feud is not ending anytime soon.

Rev Obofour also alleged that the priestess was fake adding that she has been duping people of their hard-earned money.