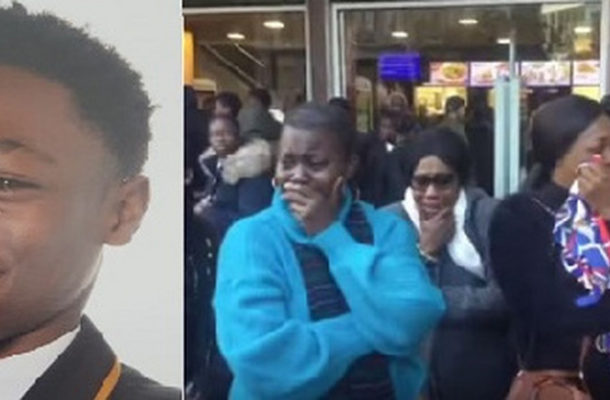 The mortal remains of 15 year old Ghanaian footballer Baptista Adjei who was stabbed and killed in London on 10th October 2019 has been interred in London on Friday after a brief funeral observation.

15-year-old Baptista Adjei  was a Manchester United fan and a keen footballer recently trialled for Ipswich Town in Suffolk, England.

He was murdered in cold blood alongside his friend, also 15 years but he remains in hospital in a stable condition, according to cops.

Baptista Adjie was wearing his school uniform when he died in daylight outside a McDonald’s in Stratford, East London on Friday.

The victim, from Woolwich, southeast London, had called his mother to say he was on his way home minutes before he was attacked at 3.20pm, his family said.

Police believe Baptista may have been stabbed during a fight on a bus near the scene of his death.

Mother of the deceased madam Janet Adjei and other mourners wept uncontrollably as the hearse containing the mortal remains of the 15 year old Baptista arrived at the funeral grounds.

She had to be restrained by other family members as she could not fathom her son has just been snatched away from her just like that.