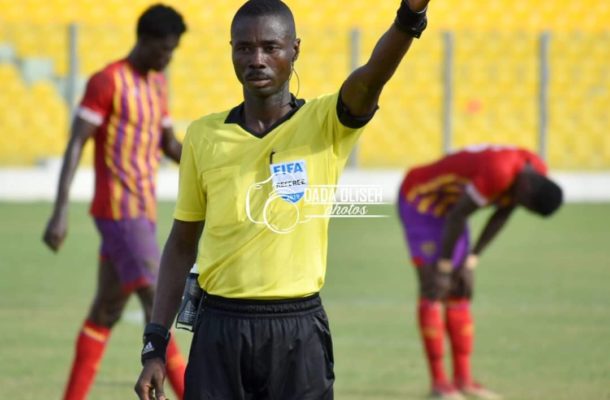 Referee Charles Bulu and his assistant referee failed to spot that the ball had crossed the line when Techiman Eleven Wonder's Abass Ganiu's shot from outside the box hit the underside of the cross bar and crossed the line before coming out.

It was a relegation six pointer for both sides but it appeared the home side Elmina Sharks wanted it more as they emerged victorious over Eleven Wonders in their match day 29 clash at the Nduom Stadium.

The home side defeated Techiman Eleven Wonders by 2-1 in a fiercely contested battle on Friday afternoon.

A quick fire brace from striker Benjamin Boateng gave the host all three points as they climbed out of the relegation zone and oushed their opponents into the scrap.

Benjamin Boateng scored his first of the two goals in the 2nd minute before he added the second goal in the 5th minute to put the game beyond the visitors.

Abass Ganiu netted for the away side to make it 2-1 but it only proved to be a consolation goal as the home side walked away with all three points.

Techiman Eleven wonders are livid that this could potentially cost them their premier league status with five more matches to go.

The call has reignited the convention about goal line technology as last Sunday a similar incident occured during the Ga Mantse derby when Hearts of Oak's Isaac Mensah's shot appeared to have crossed the line but was denied.