VIDEO: Watch all the 7 goals scored by AshGold against Inter Allies in alleged match fixing game 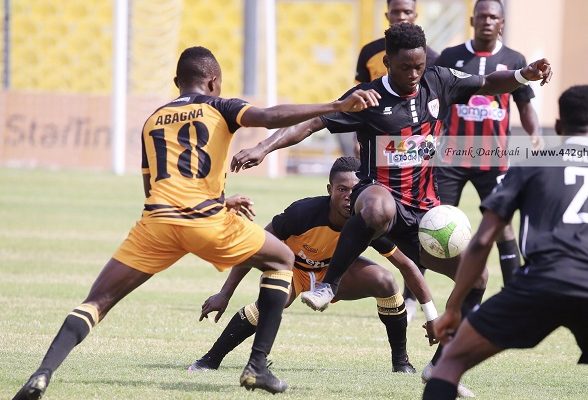 Ghana football has been rocked by an alleged match fixing scandal in the match day 34 fixture involving AshantiGold SC and Inter Allies at the Obuasi Len Clay Stadium.

The actions of the players of both teams was too obvious as it appeared they was some preconceived scoreline.

According to the player the Inter Allies team heard whiles at the Hotel that the match will end in a 5-0 scoreline in favour of the host AshantiGold SC.

The defender who has admits that he scored the two own goals in order to 'spoil' the 5-0 scoreline that had been allegedly agreed on by a betting syndicate.

Going into the game Inter Allies had been relegated already and did not mount any fierce resistance as the miners were all over them through out the game.

Young striker Isaac Opoku Agyemang run the Inter Allies defense ragged as he grabbed a hattrick on the day while it was a day of ignominy for Inter Allies defender Hashmin Musah who scored twice but it was in his own net .

The home side were quick off the blocks as they made their intentions clear in the game with Isaac Opoku Agyemang in the 16th minute after applying the finish to a sumptuous cross from Seth Osei at the right flank.

Captain Amos Addai doubled the lead for the home side ten minutes later after goalkeeper Mensah was beaten to a shot from the edge of the penalty box.

On the stroke of halftime the miners added the third goal from the spot after a foul with Isaac Opoku Agyemang on hand to convert for his second goal of the match.

Amos Addai grabbed his brace five minutes after restart to cap off a fine performance on the day.

Isaac Opoku Agyemang completed his hattrick in the 77th minute before Hashmin Musah scored twice in his own net to seal AshGold's biggest victory this season.