VIDEO: Watch highlights of AshGold's 2-0 win over Hearts of Oak 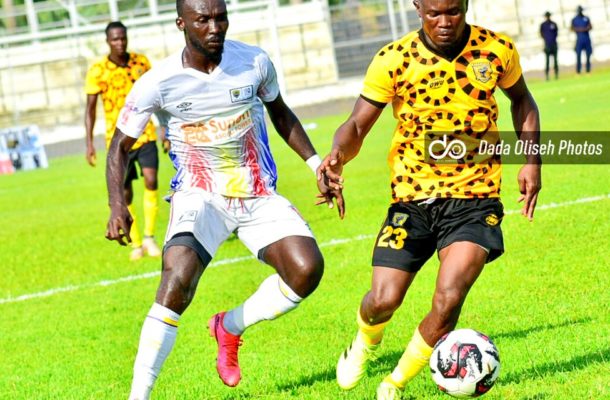 There is mounting pressure on the coach who won the Ghana Premier League title for Hearts of Oak barely some four months ago ending the club's 12 year trophy drought.

Hearts of Oak on Sunday succumbed tamely to AshantiGold SC at the Obuasi Len Clay Stadium as they still search for their first win of the season.

They look a team short on confidence and the conviction that won them the title with key players such as Emmanuel Nettey, Daniel Afriyie Barnie among others misfiring.

Hearts should have taken the lead after Patrick Razak rounded goalkeeper Kofi Mensah before striking the outside of the post with his shot.

Both teams went into the break with a stalemate as none of the teams was able to score a goal.

Yaw Annor broke the deadlock eight minutes after the break with a wonderful volley to beat Richard Atta in goal for Hearts of Oak. The two sides then changed their style of play as both coaches threaded cautiously to avoid mistakes. But the plan worked perfectly for AshantiGoold who put the nail in the coffin in added time to seal the win.

Abdul Salam added the second goal in the 93rd minute to berate Hearts of Oak to their first loss of the season – bringing to an end a succession of three draws in the opening stages of the season. The win will give the Miners a sigh following their recent struggles.