VIDEO: Watch highlights of Hearts of Oak's win over WAC 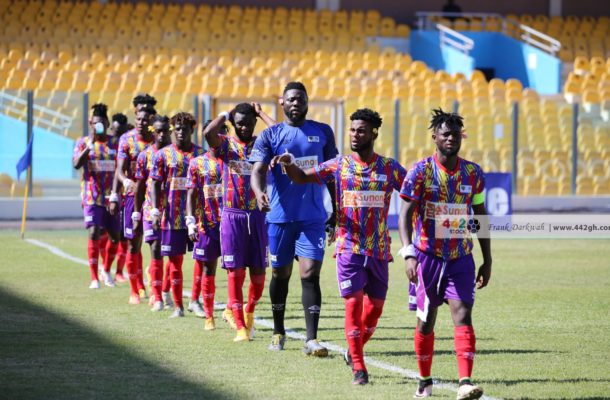 Ghanaian champions Accra Hearts of Oak defeated WAC of Morocco by a slender 1-0 score line at the Accra Sports Stadium in the first leg of their CAF Champions League game.

It was the away side who started the game on a bright note as as early as the 6th minute with WAC midfielder Zouhair El Moutaraji  stinging the palms of goalkeeper Richard Attah with a fierce drive.

Hearts of Oak took a bit of time before they settled into the game with Emmanuel Nettey getting their first shot at goal in the 15th minute which was miles of target.

Raddy Ovouka was a huge doubt for the phobians heading into the game but was handed a start but soon pulled up and was replaced by William Denkyi in the 20th minute.

Hearts asserted their authority on the game as Kofi Kordzi was brought down after exchanging passes with Daniel Afriyie Barnieh but  Salifu Ibrahim took a shot which was easily gathered by the WAC goalie.

The phobians were piling up pressure on WAC and Salifu Ibrahim delivered a cross from the left flank which was met by Isaac Mensah beyond the despairing dive of the WAC goalkeeper to give Hearts a 1-0 lead with four minutes to end the first half.

After the recess the away side came strongly into the game but Simon Msuva sent a tame ball into the hands of Richardd Attah in the 57th minute.

Fatawu Mohammed launched a long pass upfield to Kofi Koedzi who sent a rasping shot on target butr was tipped over the bar by goalkeeper Ahmed Tagnaouti.

WAC thought they had grabbed the equalizer in the game in the 93rd minute but the flag was up for offside to the delight of the home fans.

The second leg will be played at the King Mohammed V Sports complex in Casablanca on Sunday, October 24, 2021.