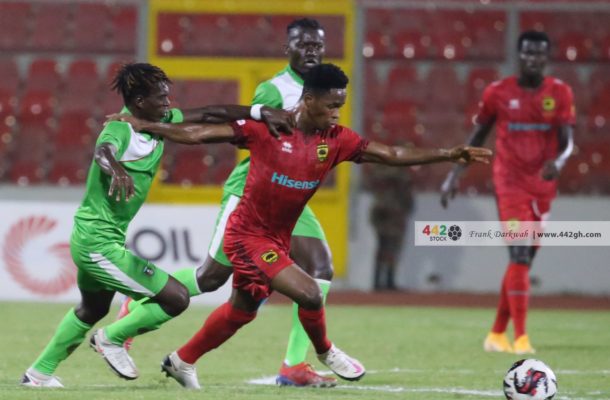 Kumasi Asante Kotoko continued their perfect start to the 2021/2022 campaign when they easily dispatched Techiman Eleven Wonders 2-0 on Sunday night at the Baba Yara Sports Stadium.

It was match day four clash in the Ghana Premier League and the reds made their intentions very clear from the onset of the game.

Isaac Kwain effected a free kick for the visitors but it was easily collected by Kotoko goalkeeper Razak Abalora but on the 6th minute Kotoko also had their own share of the free kicks.

The initial cross was cleared but the ball fell to Richmond Lamptey but his wild kick was wide off the post.

Kotoko had goalkeeper Razak Abalora to thank as the visitors nearly broke the deadlock n the 9th minute after a close range effort by Abass Ganiu was saved by Abalora.

The home side had their first glaring opportunity when Fabio Gama set up youngster Isaac Oppong who shoul have shot first time but hesitated before the ball was cleared.

Kotoko opened the scores in the 30th minute after Mudasiru Salifu nipped the ball off an Eleven Wonders defender after they tried playing the ball out from the back before he played in Samuel Boateng who arrowed a sot into the right bottom corner to make it 1-0.

Richmond Lamptey went off injured on the stroke of half time and was replaced by Cameroonian import George Mfegue for his Kotoko debut.

After recess, Kotoko started in a dominant fashion as Samuel Boateng broke into the penalty area before he unleashed a shot which was blocked for a corner kick.

On the hour mark, Fabio Gama fed Christopher Nettey but the ball was stolen from him by Perry Addison as he attempted to shoot.

The impressive Fabio Gama thought he had scored his first for the season after his fierce thunderbolt which heading into the roof of the net was tipped over by goalkeeper Razak Issah for the visitors.

Eleven Wonders began to push for the elusive equalizer as they committed more men forward in the last 20 minutes of the game.

But Kotoko stunned the visitors with the second goal in the 75th minute from wonder kid Isaac Oppong who received a pass from the left beat his marker before curling into the roof of the net to make it 2-0 and a third goal Kotoko.

Kotoko have now made it four wins from a possible four points and will next play against Karela United at Anyinase on match day 5.