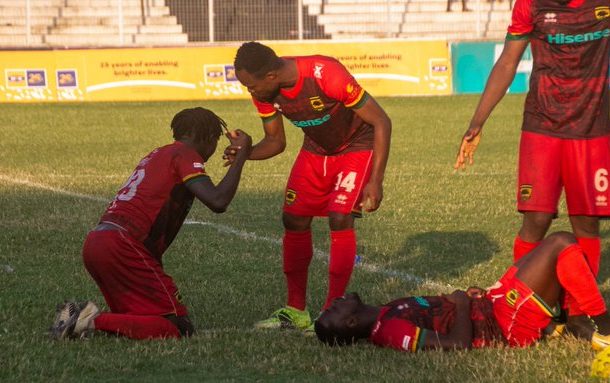 Kumasi Asante Kotoko have ended the 2020/2021 season empty handed as they have been dumped out of the MTN FA Cup by Berekum Chelsea at the Obuasi Len Clay Stadium.

It was a game that had almost everything during regulation time except goals as both teams went toe to toe in an enthralling contest.

The home side should have scored at least a goal with two glorious chances that came their way but Emmanuel Gyamfi missed the first chance as he shot into the midriff of the onrushing goalkeeper Ernest Sowah in post for Berekum Chelsea.

Moments later Solomon Sarfo Taylor rounded the goalkeeper but shot wide when he should have done better.

Mudasiru Salifu limped off and was replaced by Kwame Adom Frimpong but Kotoko had half chances which they failed to take advantage of.

In the 35th minute the referee awarded Kotoko a contentious penalty when Solomon Sarfo Taylor was adjudged to have been shoved down in the box after chesting the ball.

Fabio Gama elected himself to take the spot kick but his curler was palmed away by the goalkeeper while Sarfo Taylor missed the rebound.

The first half ended goalless as both teams failed to take advantage of the chances that came their way.

When the second half started Berekum Chelsea asserted themselves more with Stepehen Amankona causing the Kotoko defence a lot of troubles.

He sent a wild shot on goal but it was comfortably dealt with by Razak Abalora but Solomon Sarfor Taylor stuck the upright in the 79th minute after a corner kick.

Steven Amankona had a freekick in the last minute of the game but shot into the human wall as the 90 minutes ended.

They played 30 minutes extra time but no team was able to score a goal as the match headed into the dreaded penalty shoot -outs.

It was Kotoko who took their first penalty with Patrick Asmah converting before Anokye Badu equalized for Chelsea.

Evans Adomako netted the second for Kotoko before Collins Ameyaw also did same for Berekum Chelsea with the third Fabio Gama scored before Ensu also scored for Chelsea.

Both teams scored their first three penalty kicks before Kotoko's Wahab Adams skied his own which was Kotoko's fourth kick.

Captain Steven Amankona converted the last penalty kick to send Berekum Chelsea to the last four where they will face Obuasi AshGold.