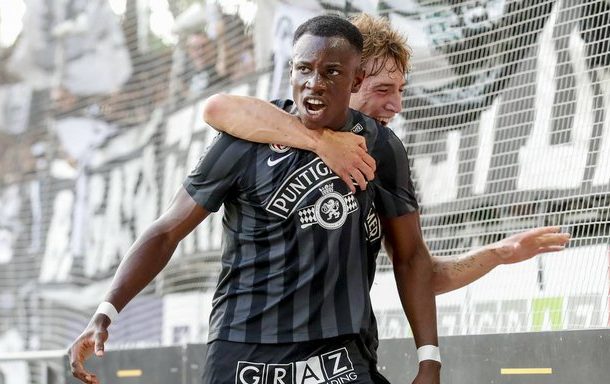 Kelvin Yeboah marked his latest call up to the Black Stars with another goal as his side SK Sturm Graz defeated LASK Linz 3-1 in the Austrian Bundesliga game on Sunday.

The Ghanaian striker was handed a maiden call up by Black Stars coach C.K Akonnor in his 30 man provisional squad for  two 2022 World Cup qualifying matches.

He opened the floodgates of a match that ended barren after 45 minutes with a well taken strike in the 66th minute of the second half.

Yeboah received a pass from the right side beat his marker before unleashing a right footed shot into the center of goal to make it 1-0.

Nephew of the legendary Anthony Yeboah did not play the full 90 minutes as he was taken off in the 71st minute with Ivorian striker Anderson Niangbo his replacement.

Sturm Graz added two goals with Manprit Sarkaria grabbing a brace in the 83rd and 95th minute while Peter Michorl scored what turned out to be a consolation goal in the 85th minute.

Kelvin Yeboah has now netted three goals in four matches this campaign in the Austrian Bundeliga for his side.