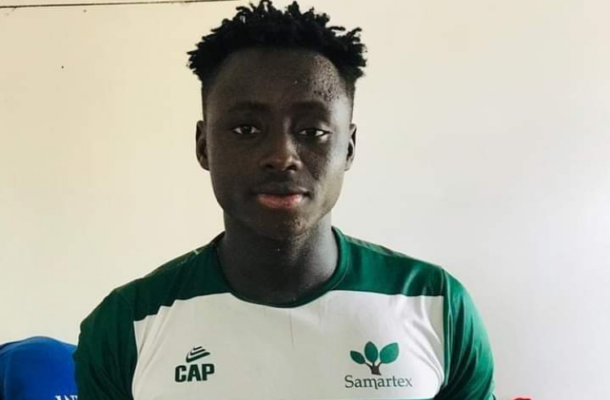 Accra Hearts of Oak have signed talented youngster Benjamin Yorke from lower tier side  Samartex 1996 after the player passed his medical examination on Friday.

The 21 year old  pacy winger has signed  for the treble winners on a five year contract until 2026.

He has been on the radar of Asante Kotoko when the Porcupine first spotted the youngster after scoring against them in a preseason friendly at Samraboi.

He was spotted at the Phobians' camp last week when the team were feted at the residence of the majority shareholder Togbe Afede.

The 21 year old has been fantastic and consistent since coming into the limelight having netted 7 goals to finish as Samartex top scorer in the NC special competition in 2019 having replicated same output in zone two of the just ended division one league.

Benjamin Yorke, 21, has now been signed by the champions with his official announcement very imminent though his name wasn't seen in their final squad for the CAF Champions League.

He was part of the Black Stars B squad that failed to qualify for the last CHAN tournament which was held in Cameroon.

The speedster had a scintillating season with the second-tier side netting 12 goals in 23 games in the just ended Division One Zone Two. However, his output was not enough to secure promotion for Samartex as they finish third behind Bibiani Gold Stars and Sky FC.

He joined the Samreboi based club in the 2014/2015 season and has eventually ended a 6-year stay with the Green and Whites.