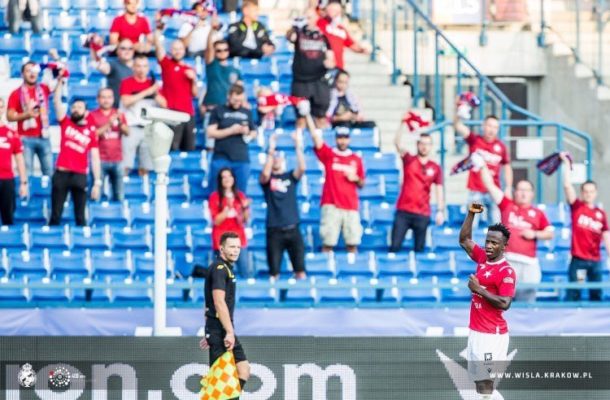 Ghanaian forward Yaw Yeboah scored for his Polish side Wisła Kraków in their 3-1 win over Gornik Leczna in an away game on Saturday.

It was an easy win for the away side in their match day five clash at the Stadion Gornik Leczna.

Michal Skvarka’s opened the floodgates for Wisla Krakow in the 20th minute of the game before Yaw Yeboah added the second goal.

The Ghanaian's goal was a sight to behold in the 48th minute as he received the ball on the edge of the 18 yard box danced his way through a sea of defenders with pure skill and panache before unleashing a shot across the goalkeeper for his side's second goal.

Wisla Krakow were home and dry as Felicio Brown Forbes added the third goal in a relatively comfortable game for the away side.

In the 74th minute Micheal Frydrych scored an own goal in what appeared as a consolation goal for the home side to make it 3-1.

Yaw Yeboah was substituted in the 78th minute of the game for former Dortmund man Jakub Błaszczykowski.