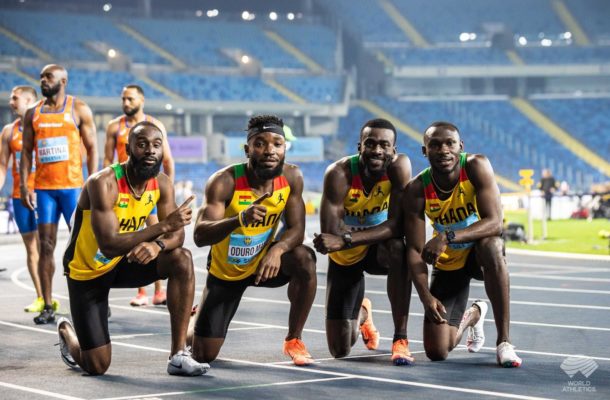 Ghana's 4x100 men's relay team booked a place at the summer Tokyo 2020 Olympic games after they finished second in their heat at the World Athletics Relay staged in the Silesian Stadium, Chorzów, Poland.

The athletes have called for support from government in order to help them prepare adequately for the Olympic games.

In an interview with TV3, they said they are not asking for $25million as the Black Stars is asking but they just want the support of the government.

Sprinters Benjamin Azamati, Safo-Antwi, Joseph Paul-Amoah and Joseph Manu secured Ghana a place at Tokyo 2020 and the World Athletic Championship in Oregon, USA, it was a disappointing end to their weekend after their disqualification from the tournament.

Ghana’s team was disqualified in the finals after breaking changeover rules. The final changeover took place outside the authorized zone.

Ghana’s disqualification came as a result of a late changeover – Rule TR 24.7 between the pair of Azamati and Joseph Manu.

“We are not expecting them to do the greatest of things for us. We understand Ghana is a soccer nation, we know America is a football nation, although they put a lot of money into football, they still support track and field." they told TV3 in an interview

“So we are not expecting Ghana to give us all the money, we know soccer is our first game and we love it but can we atleast get some support? It just clear, look at the margin, we just heard about some $25 million and ask yourself how much we were given. We are not asking for $25 million but show us that you love us and support us. That will motivate us,”he added