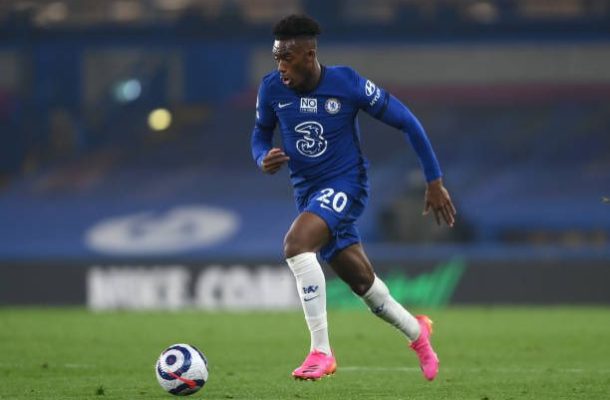 Callum Hudson- Odoi on Thursday evening went for a kick about at the Queensland Astro Turf in Sakumono in Accra where he is on holidays.

An Odoi XI squared up with musician and close pal of the Chelsea youngster King Promise XI.

The 20 year old produce some sublime and silky skills on Thursday night as he run rugged the players of the opposing side.

The venue for the kick about was filled to the raptures as persons from all walks of life wanted to catch a glimpse of the Chelsea man in the flesh.

The Chelsea youngster Callum Hudson-Odoi is in Ghana after the season ended with him lifting the UEFA Champions League trophy last Saturday against Manchester City at the Estadio de Dragao.

The 20 year old winger was an unused substitute as Chelsea lifted its second Champions League trophy.

After being overlooked by England manager Gareth Southgate for the Euro 2020 tournament which kicks off next week the England-born with Ghanaian parents is back home in Ghana for holidays and was met on arrival by Ghanaian musician and close friend King Promise.

Hudson-Odoi was born and raised in Wandsworth, Greater London and is the younger brother of non-League striker Bradley Hudson-Odoi and the second son of former Hearts of Oak Ghanaian midfielder Bismark Odoi.