Vietnam fight back for opening win 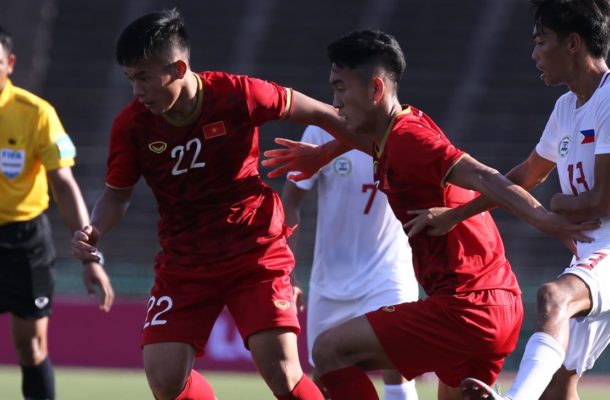 Phnom Penh: Vietnam kicked off their 2019 AFF (ASEAN Football Federation) U22 Championship campaign on a high as the Golden Dragons came from a goal down to defeat Philippines 2-1 in a Group A tie at the National Stadium in Phnom Penh on Sunday.


Vietnam, coming into the tournament on a high after the exploits of their senior and U-23 teams over the last 12 months, proved they will be a force in the 2019 AFF U22 Championship as they showed great determination to fight back after Philippines had taken the lead against the run of play in the 51st minute.

It was a totally unexpected goal as Vietnam had several opportunities to open the scoring in the first half, but poor finishing, great defending and outstanding Philippines goalkeeper Michael Cangco Asong kept the score goalless.


Six minutes into the second half, Philippines took the lead through Christian Lapas, whose curling free-kick was palmed into the net by Vietnam goalkeeper Phan Van Bieu.

A stung Vietnam immediately pushed back but had to wait till the 74th minute for their equaliser, with Tran Danh Trung drawing them level.

Having defended resolutely till that point, a tiring Philippines just could not hold off Vietnam after that as the 2018 AFc U23 Championship runners-up hit the woodwork two minutes later and then took the lead in the 78th minute.

Le Minh Binh, having spurned several chances earlier, was their hero as Vietnam then ran down the clock to seal the three points.

Up next for Vietnam are Timor-Leste on Tuesday while Philippines will play Thailand.

The 2019 AFF U-22 Championship is a pre-cursor to the 2020 AFC U23 Championship Thailand Qualifiers which kick off next month.