Wakaso apologizes to Minister after insulting him in Tamale 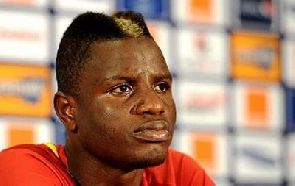 Black stars midfielder Mubarak Wakaso and a delegation went to render an unqualified apology to Hon. Nii Lantey Vanderpuije after the player rained insults on the minister before Friday’s Russia 2018 world cup qualifier game against Uganda which ended goalless at the Tamale Stadium.

The former Las Pamas player is reported by Takoradi based Spice FM to have warned the Minister and calling him names before kick off.

The meeting took place at team’s hotel after the game around 8pm-8:30pm.