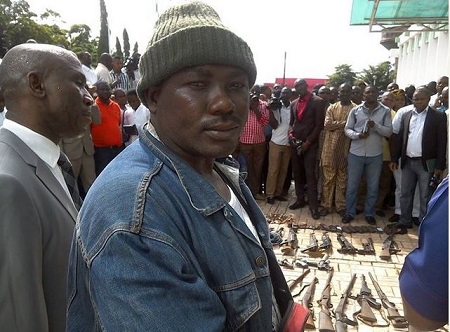 The state Commissioner of Police, Fatai Owoseni, yesterday told our correspondent that the militia kingpin led his gang in confrontation with the security operatives during which two mobile policemen were killed.

Owoseni who debunked rumours that the attacks resulted from armed conflicts between two communities of Kastina-Ala and Ukum LGAs respectively, stressed that the incident had nothing to do with communal clash.

“It was a militia attack led by Ghana himself. Apart from the two mobile policemen killed, no other death linked to that particular incident was recorded,” Owoseni said, adding however that houses, mostly thatched roofed types, were burnt down alongside two patrol vehicles and a house belonging to the state’s Special Adviser on Security, Col. Edwin Jando (retd).

Owoseni also confirmed that Ghana’s gang torched some houses in Shitile of Kastina-Ala but that there was no killing in the area.

Our correspondent earlier gathered from locals that the incident which happened on Tuesday was a spillover of disagreement allegedly between splinter gangs headed by Ghana which operated mostly at Ukum and Kastina Ala LGAs.

A local said a faction of the gang had rebelled from being under Ghana’s control and as such they were fighting others, adding that that the attempt of the security men to stand on their way caused two of them their lives.

The wanted kingpin was in March last year blamed for the killing of many people at the Zaki Biam yam market in Ukum and he has been on the run for nearly two years now on allegations of several other acts.