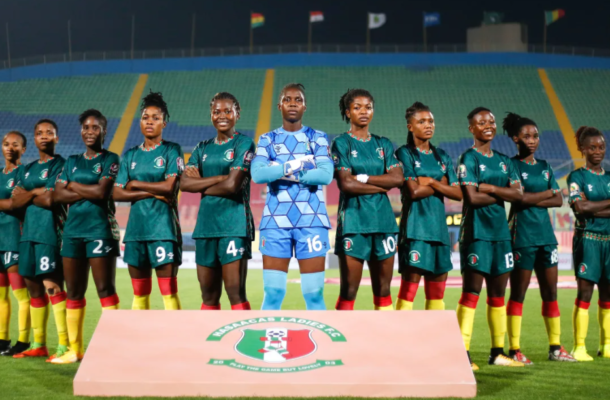 Skipper Janet Egyir: I kept pushing to make it here!

The 29 years old that was also a runner, a volleyball player, and a basketball player, but she left it all for football. She leads her team to the final of the WCL, one step closer to achieving their dream.

“I left all the other sports for football, but I started playing with boys in school when I was a little kid. It was not easy, I did not have support in the beginning, but later on when I grew up, my uncle stood by me to achieve my dream of being a professional footballer”.

“My team is very special! It’s a unique team, we do everything together”.

“In the beginning, it was a rough route, and still is. But I kept pushing all the time to be where I am today. I urge girls to never listen to anyone telling them what they should and shouldn’t do”.

“WCL is a dream come true for us. Every player in Africa dreams of such a chance. So, the first thing I’d do, shall we win this trophy, is thank God. Then I’ll go crazy with my team”.

Azumah Bugre: I want to make my mom proud!

The WCL finalist who used to get sacked from boys when she wanted to play football, is also an air forces member, in addition to being the key midfielder to Hassacas Ladies.

“I used to play football with boys in the school, they used to sack me saying I shouldn’t play football because I’m a girl, but I kept coming back. Then I realized I can really play football, and so did they. Then I started playing in a female team. It was not easy to start playing football, but I did it. Where I come from, girls are only prepared to get married and cook for their men, so what I did was out of the norm. But playing football makes me happy, so I had to do it”.

“Now that I’m playing in WCL, everyone is amazed. ‘We did not think you can make it this far’ they say. But my mother, who fought to take care of 5 kids, always supported me from the first minute. She was not always capable financially, but she did everything she could for me”.

“I want to tell young girls out there: ‘you have the power in you to be who you want to be’. It all depends on the determination, focus, hard work the person delivers. If I had listened to anyone bringing me down, I wouldn’t have been here now. And parents, especially African parents, supporting what your kids want, it really helps. Do not kill their talents, stand by them and show them the way, whether it’s sports or anything else. A family’s support is the most important thing for a person. I will spill every drop of sweat in the final, because I know my mother will be watching and supporting me”.