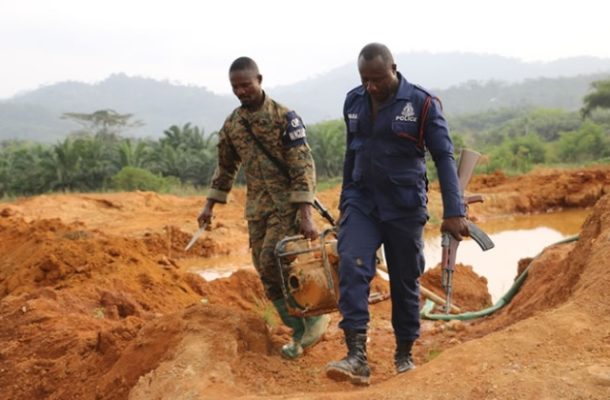 Editor of the Informer Newspaper, Andy Kankam has stressed that the constitution of a task force to fight illegal mining ‘galamsey’ will only make the situation worse.

According to him, previous taskforces set up to end the menace ended up working as security for these illegal miners, Happyghana.com reported.

Commenting on the National Consultative Dialogue on Small-Scale Mining that took place last week, Andy said, “We don’t need a taskforce to fight galamsey, it is a waste of time to do so. Taskforces in the past used the opportunity to enrich themselves”.

He described military personnel who formed part of previous taskforces as corrupt. “They also go for monitoring operations and come back far richer than they would’ve been if they were on peace keeping missions”, he added.

Speaking in an interview on the Happy Morning Show hosted by Samuel Eshun and aired on e.TV Ghana and Happy98.9FM, Andy suggested that the most effective way to deal with the galamsey menace is equal punishment for all regardless of social status.

He shared, “If we can’t punish politicians of both the NPP and NDC involved in galamsey, then we should forget about it. They are the same people preventing the galamsey fight from achieving success because of their involvement”.

“If we find Wontumi or Asiedu Nketia involved in galamsey, they should be punished just like an ordinary person would be and nothing more”, he indicated.

The National Consultative Dialogue on Small-Scale Mining which was held from Wednesday, April 14 to 15, 2021 aimed at forging a broad-based consensus and a workable blueprint to promote sustainable mining practices and stem the tide of illegal small-scale mining in the country.

The Dialogue brought together key stakeholders in the mining industry including the Ghana Association of Small-Scale Miners, Ghana Chamber of Mines, chiefs from the 16 regions, members of the Council of State, members of the National House of Chiefs, Former Ministers of Lands and Natural Resources, heads of state institutions, academia, representatives of political parties, civil society organizations and captains of industry.