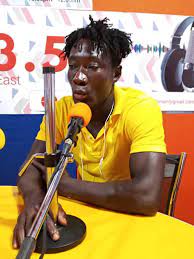 Captain for Techiman Eleven Wonders, Simms Kwayie says that they expect to get fair officiating this time when they face Asante Kotoko in their match day four clash at the Baba Yara Stadium.

He says referees have decided the results of games against Kotoko at the Baba Yara Sports Stadium in two out of their three clashes with only one win from Kotoko being fair.

Asante Kotoko have started the season in blistering fashion having defeated Dreams FC, Bechem United and Bibiani Gold Stars making it three wins out of three.

The porcupine warriors will be looking to add the Techiman based side to their scalp but Kwayie says all they need is fair officiating.

Speaking in an interview with Ashh FM, the rugged defender says they always give Kotoko hard times but the reds are mostly rescued by referees.

“If you watched those games, we suffered bad officiating. In all the two games it didn’t end well for us. In those games, the referees did everything to ensure that Kotoko will win the day and it is quite frustrating.

“But the other victory they had was a clean one. Aside that one, the other two games we were hard done by the referees and I hope this weekend’s fixture will be quiet different."

Eleven Wonders are yet to win a game having draw two and lost one so far.