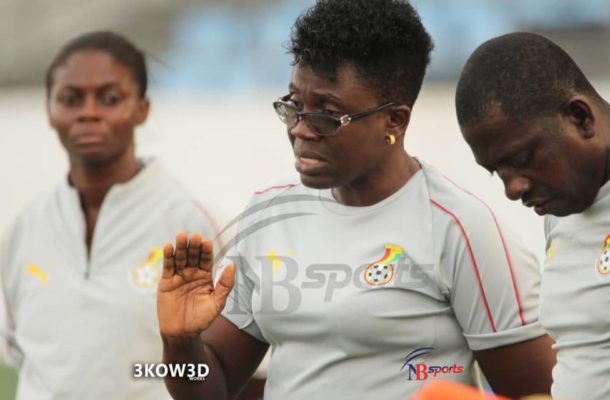 Head coach of the senior national women's national team, the Black Queens, Mercy Tagoe Quarcoo has taken a swipe at the powers that be for their handling of women's football in the country.

She bemoaned that Ghana once a pace setter in women's football have been overtaking by countries like South Africa who were not co-equals with Ghana when it comes to the women's football on the continent.

The Black Queens were rubbing shoulders with the Super Falcons of Nigeria and were the first senior national team to qualify for the World Cup for the first time in 1999 even before the 'hallowed' Black Stars did it seven years later.

She has hit hard at the governement and GFA as the women's game has regressed over the years as compared to other African countries who have managed to develop the women's game.

Ghana lost to South Africa at the inuagral Aisha Buhari Cup tournament that is currently underway in Nigeria before saving their face with a win against Cameroon.

Speaking after the team's win over the Indomitable Lioness of Cameroon, Mercy Tagoe-Quarcoo has hit out on the poor approach towards women's football in the country

“Coincidentally both sides (Ghana and Cameroon) brought fresh legs into their team, trying to test their pulse and how best they can fit into the team,” she started.

“My team for instance, like I told you the last time, South Africa being our sisters and girlfriends brought all their stars and we all know what Thembi Kgatlana can do, and what she is doing and what she will continue to do,” she added.

“I respect them so much because they have taken the women’s football to the next level and we all have to look at it and emulate. We are joking, believe you me, we do this today, tomorrow we do that and next time when we are called we think we will get there. When you sleep, others will wake up and do it for you to see.”

The Black Queens team traveled to Nigeria without key members of the team’s foreign-based players, including captain Elizabeth Addo, who was reportedly left out of the team after she criticized the Ghana Football Association on social media for neglecting the Queens.

Ghana will play Nigeria on October 17, in the first leg of the qualifiers for the 2022 Africa Women’s Cup of Nations.