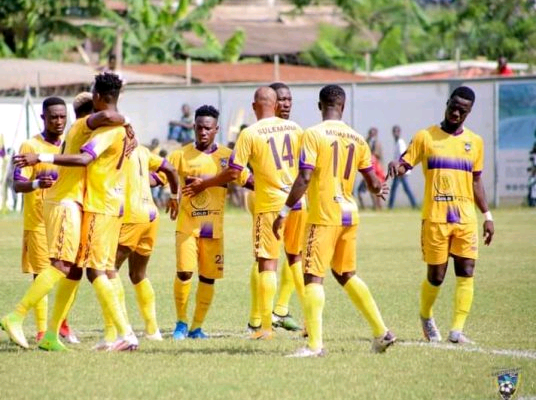 Coach Yaw Preko grabbed a lifeline at Tarkwa after leading Medeama FC to snatch a late 1-0 over Karela on Saturday in their Matchday 28 derby.

Vincent Atinga's late header saved the Mauves and Yellows from further chaos as it calms nerves and gives hopes to their title ambition.

Medeama had to recover from their 3-0 defeat to Inter Allies FC last week in Dawu after a second half screamer from Vincent Atingah sealed them the win on Saturday.

A late stunner goal from the centre back in the 84th minute rescued Medeama SC in the Western Regional derby against Aiyinase based Premiership club Karela United FC. Despite, Medeama SC parading skillful and good ball handlers could not burry Karela United FC in the first half having created few chances.

The visitors led by Coach Evans Adotey had his charges displaying well and detecting the pace of the encounter in the third quarter after settling down but luck was not on their side to punish the Tarkwa based outfit at the Akoon park.

However, Karela United FC needed to bow to a late screamer from former Hearts of Oak SC defender and WAFU Cup winner Vincent Atingah when they failed to have him marked.

The only strike of the game, has revived Medeama SC ambition to fight for the Ghana Premier League title.

Currently, they have amassed enough points to climb to the 4th position with 46 points after 28 league games.

The win really lifts some pressure from coach Yaw Preko and his assistant Yaw Acheampong as they were given an ultimatum to win or face a sack.