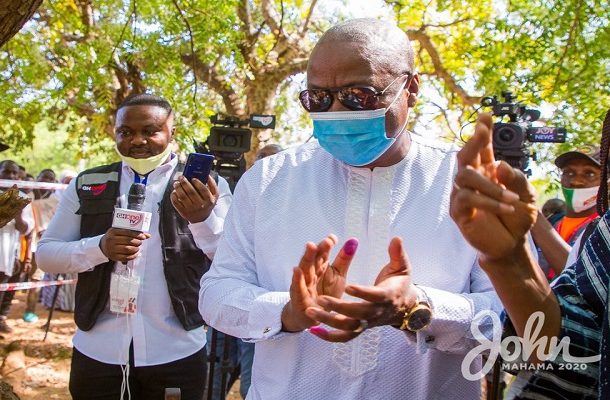 Cadres of the great NDC who are demanding from the party's 2020 Presidential candidate must know better. Like corporate organisation, NDC has a structure and same are firmly in place for the purposes of good governance practices.

Once these systems of a political party are in place it affords members the opportunity to seek redress or have issues solved there.

The party's constitution allows for elections of it branch executives, constituency executives, regional executives, National and it Flagbearer. Each elected executive has his/her role to play and the constitution further gives powers to the executives to select some other portfolios and constitute committees. These committees are then mandated and tasked to execute an assignment all in the interest of the party towards victory in any election.

It's only proper and fair that after the 2020 General Elections, to assess the outcome and way forward based on measures put in place, we will then have to proceed in righting the wrongs, who did what and all of that.
These activities and/ or postmortem in the interest of the party, can't be done in an open. It must be done internally. Let's bear in mind our opponents are watching closely what we are doing in other to outsmart us particularly when they are so desperate to break the 8 cycle.

So why on earth will party kingpins and for that matter cadres go to town to demand accountability? Why use the media to demand on our 2020 Candidate, John Mahama of our elections results?
John Mahama was a flagbearer and leader of the NDC in the last election and that of the 2016 general elections. As a leader, he does things in consultation with the functional executive committee (FEC) who are elected executive and take advise and directions from the National executive committee (NEC) and that of the council of elders.

Let's bear in mind all these portfolios comprises of both the new entrance and Cadres of the party, so why will they now be acting as if the Cadres or some people were neglected in making decisions. John Mahama wasn't a polling agent on the day of the election, neither was he a prompter, nor was he in charge of pink sheets at all levels. He only led the Party into a major election. As a leader, he did everything humanly possible and constitutionally
sanctioned duties to bring us victory.

The demands for pink sheets are totally misdirected. They should come and tell the world what Mahama must or ought to do which he didn't do. John Mahama as candidate made sure finances were provided for the executions of activities and to run the party.
He did what Napoleon couldn't do. Resources for IT infrastructure and he made provision for it. If the IT team failed or succeeded in their work one should direct their grievances there. Director of elections management were also resourced, whether they did or didn't do their work, it has nothing to do with John Mahama. A lot of other things I don't want to go into but my main point is that, they shouldn't attack John Mahama and they should use the proper channel and not the media.

If John Mahama has done or did what is expected of him, why will anybody turn to blame him and make demands on what he didn't concern himself with. The man did everything he should do. The rest were for others.

Given the context above one can only safely conclude that, the meeting of Saturday 17, 2021 was an agenda against John Mahama reelection bid. I expect them to know better and know the proper channel of communications in the party or any corporate governance structure.
The Media can not be the best channel to any of the party's internal issues and whoever think he/she is dragging the image of John Mahama into the mud for his/her personal interest or for their pay masters, must be guided by the fact that, they are not doing any good to the party they want the world to know they founded or belong to.

Their actions and inactions are damaging the reputation of the party and not John Mahama. Let's us all resort to proper channel of dispute resolution and not this tattered ways. The young ones in the party are still looking up to some of them and they must teach us what will keep this party alive even when they leave us but not what some of us are seeing them do.
Know one is perfect and they must know they are not perfect as well.