What is a dental dam, and do you really need to use one? 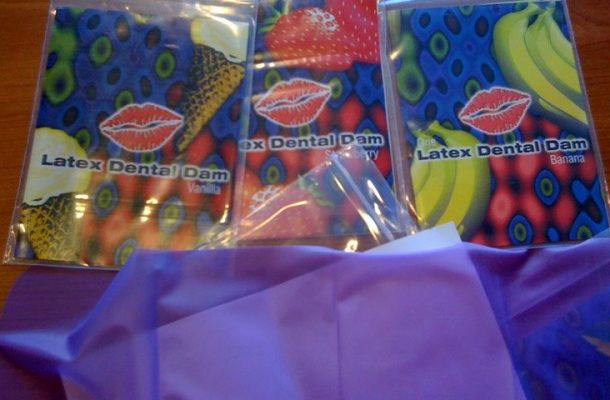 By now, you're probably familiar with all of the benefits of condoms: they keep you safe from STIs and unwanted pregnancies; they come in different sizes, flavours, and textures, and they look pretty in their packaging.

If you and your partner haven’t been tested yet, you really do need to use them. (And you should check out these top-ranked condoms for pleasure and comfort.)But do you need to use condoms during oral sex, too? Well, if you're receiving oral sex, you can reduce your risk of contracting an STI by strapping one on a condom.

Basically, a dental dam is a condom for a vulva (the external part of the female genitals).“It's a rectangular piece of material, usually latex or polyurethane (the same material used for condoms), used to protect someone who is performing oral sex on a partner [with a vagina],” says gynecologist Jennifer Landa, MD, Chief Medical Officer at BodyLogicMD. It can also be used if you're performing analingus.While they're certainly not as widely sold as condoms, dental dams are available at drugstores or on Amazon.How do you use dental dams?You can wear a dental dam by spreading the latex over the clitoris or anus before performing oral sex or analingus on a partner. If you don't have one handy, you can also make a dental dam by cutting up a plain old latex condom.Why is it important to wear a dental dam?Wearing a dental dam while performing oral sex or analingus “can help prevent the transmission of STIs including gonorrhea, chlamydia, herpes, HPV [human papilloma virus], syphilis and HIV,” Landa says (though it's worth noting that the risk of contracting HIV via cunnilingus or analingus is very low.)It's worth noting that dental dams are more protective against some STIs than others. Sherry Ross, MD, OB/GYN and Women’s Health Expert in Santa Monica, CA, notes that while the relative risk of getting an STI through unprotected oral sex is extremely low when it comes to something like HIV, "it could be as high as 13% with chlamydia and syphilis."Landa says that HPV is of the most concern when it comes to performing cunnilingus. “Many people aren't aware that oral HPV is associated with an increased risk of mouth and throat cancer, which can be life-threatening,” she says.Known as oropharyngeal cancer, this type of HPV-associated cancer is most common in men in their 50s and 60s, and using a dental dam while performing cunnilingus can significantly reduce the risk of HPV transmission. That said, don’t be too alarmed: the overall prevalence of oropharyngeal cancer is only 0.7% in men, says Landa.Is it really necessary to use a dental dam?Dental dams have a reputation for being cumbersome and unsexy. As a result, while you may see them passed around in health class from time to time, couples tend to shy away from actually using them.“There is a statistic that less than 10% of women use dental dams, but if everyone is being honest, this is not a realistic number. I would say less than 5% of women use dental dams in real time. It may even be lower than 5%,” says Ross.Overall, Landa says, the benefits of using a dental dam are relative. "Use of a condom with intercourse will decrease your risk of getting an STI much more than using a dental dam for oral sex,” she says. That said, "if one wanted to be as safe as possible, then a dental dam would be a good preventive measure."The takeaway? If you want to be as smart as you can and guarantee protection, try one out. "It may not be convenient or sexy, but it should be used to help prevent common sexually transmitted infections," Ross says. "And defense is the best way to prevent STIs."Source: Men’sHealth