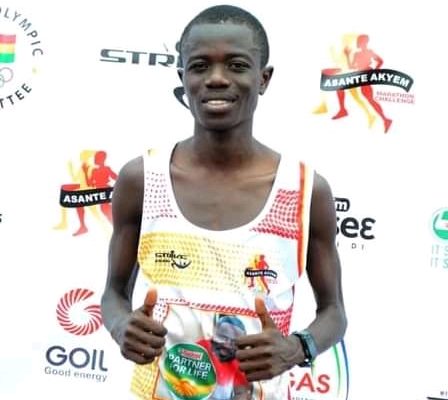 William Amponsah claimed his second Asante Akyem Marathon glory on Saturday, clocking a time of 1hr:12min.39sec to win the 4th edition of race in the men's category.

The long distance magician made a triumphant return for the 21klm competition, 4 years after winning the maiden edition in 2017.

He and Sakat Lariba ran their race in the best of time to emerge as champions for the Male and Female categories  respectively.

It was his second participation in the competition that brought him to limelight in 2017, after failing to compete in the 2nd and 3rd edition due injury.

He had a prize money of GHS 5,000 and in addition, a fully funded will trip to London.

The much anticipated event, aimed at unearthing talents and also promoting Ghana Athletics was organized by SportsLife and powered by Adanseɛ 98.9 FM.

Over 400 participants being Men,Women and juvenile registered for the 2021 marathon with the Men competing in 21km(Nyabo to Agogo) while the Women and Juveniles also participated in 12km(Juansa to Agogo).

Ishmael Arthur, also a former winner ran a time of 1hr:14min.47sec to clinch 2nd position with a prize money of GHS 3,000 going his way while Koogo Atia who placed 3rd with a time of 1hr:15min.22sec had a reward of GHS 2,000. Again, athletes who took the position of 4th-10th in the men’s category earned earn GHC 200 each.

She faced a test, but she did her best to be the first ahead of the rest, claim the 2000GHS prize money for the 12km race.

For the Juvenile participants, the 1st - 10th placed runners were rewarded with some educational materials and products from Cowbell Ghana. The event attracted runners from Italy and South Africa.


Director General of NSA, Prof. Peter Twumasi presented the top most award to the Male winner Amponsah stated, competitions of this nature aimed at discovering potentials deserves and creating avenue for talents to develop deserves national attention and support.

The National Sports Authority Boss ending his speech commended the former N.S.A Board Chairman, Hon. Kwadwo Baah Agyemang who is the founder of the organizing company for having such vision putting together such a successful event.