Woman, 23, in custody for stabbing boyfriend 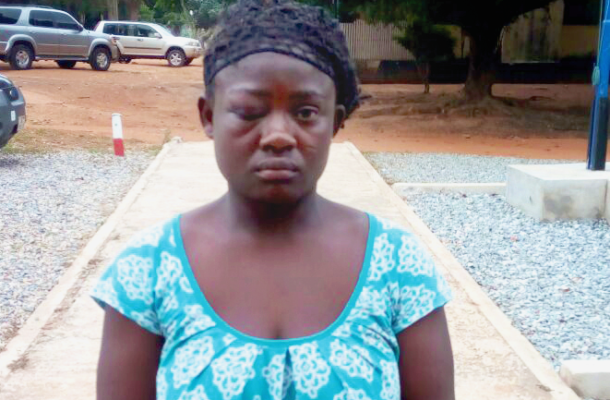 A 23-year-old unemployed woman, Akua Oparebea, is in the grip of the police for allegedly stabbing her 36-year-old boyfriend to death following a misunderstanding.

The suspect is said to have left her boyfriend in a pool of blood in their makeshift wooden structure at Taifa in Accra. She then escaped to her hometown at Suhum in the Eastern Region.

Briefing the Daily Graphic, the Crime Officer of the Accra Regional Police Command, Chief Superintendent of Police Edward Kumi Faakye, said the deceased, Moro Okai, was a driver who lived with Oparebea and her two sons in a kiosk.

He said investigations had revealed that Okai had returned home from work at about 11p.m. and found that his girlfriend was not at home.

He said Okai called Oparebea on phone to enquire about her whereabouts; she told him she had visited a parcel of land they had bought at Amasaman.

When Oparebea returned home, according to Mr Faakye, Okai, who was not satisfied with the response she had given earlier, picked up a quarrel with her.

He said the two engaged in an exchange of words which degenerated into a fight during which Oparebea was said to have used a kitchen knife to stab Okai.

Subsequently, Oparebea is said to have shouted for help to convey her boyfriend to hospital but when no help came, she escaped with her two children to Suhum and left Okai to his fate.

Later, a brother of Oparebea, identified as Patrick Opera, who lives in the same vicinity, was alleged to have found Okai lying motionless in a pool of blood.

He then took Okai to the 37 Military Hospital, where he was pronounced dead.

Mr Faakye said Oparebea was tracked to her hideout and arrested after a report was lodged with the Mile Seven Police.