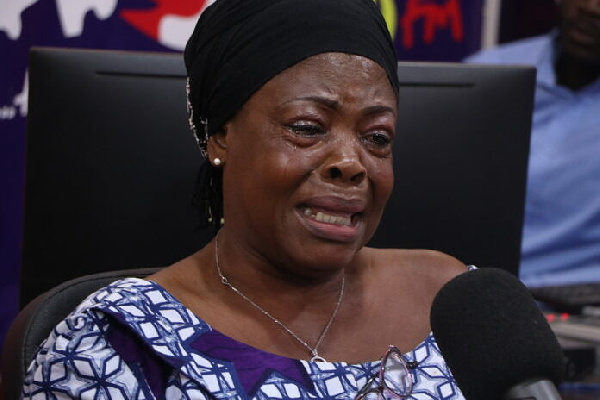 Katherine Ossom in tears as she narrates her experience

Many viewers and listeners described it as pathetic, others could not believe their ears as the 53-year-old woman narrated how she had to undergo three Cesarean Sections, just to correct an error from a previous operation.

Katherine Ossom narrated on ‘Asem Yi Di Ka’ segment on Angel FM on Thursday that her ordeal began on October 22, 2003, when she visited the Roman Catholic Hospital in Agormanya in the Eastern Region to deliver her third child.

Her narration was part of Angel FM’s campaign against medical negligence in Ghanaian Hospitals dubbed #PatientLivesMatter.

Nurses at the facility who were on duty that day, however, failed to take care of the expectant mother, forcing her to approach the nurses who came in for the night shift for help.

Speaking in Twi, she said: “I slept there overnight, it was around 7:00pm that they decided to take me to the theatre…I regained consciousness only the next day after the CS. I started experiencing severe pains and when I told the doctor, he said he will ensure I am given another drug…,” she stated.

She said that a community nursing officer at the facility came in and injected another drug into the drip which made her sleep.

“However, after I woke up again I felt very heavy, I complained to my husband’s younger brother who had signed on behalf of my husband for the CS to be conducted on me that, I was feeling heavy. He, however, replied that it may be due to the drip administered to me…,” she recounted.

Madam Ossom started bloating after the third day on admission.

“My hands and legs had all swollen…,” she said.

According to Madam Ossom, the doctors attributed this condition to a wrong medication which was given her by the community nurse.

“When I was discharged, I started experiencing severe pains in my abdomen when taking my bath and my sponge always got hooked onto something under my navel which made me feel uncomfortable…I could also not even eat because of the severe pains…,” she added.

Madam Ossom said this made her go for another scan which confirmed that the doctors had mistakenly left one of the surgical blades in her abdomen.

She was thus compelled to go for another surgery for this to be corrected.

“Days after undergoing another surgery to have this blade removed, I still had serious pains in my abdomen to the extent that I could not even carry my child…I could virtually not do anything.

“My husband took me to Dr Lamptey at High Street [in Accra] who re-examined me and gave me a report in an envelope to be given to the Doctor who performed the earlier surgeries…,” she said.

Her husband then led her to the doctor who, after reading the report, decided to correct the error again -to remove stitches left in her abdomen.

But this time around, he seemed fed up with the lady and the surgeries so decided to do the unthinkable.

“After 15 minutes, he asked that I excuse him and my husband which I did…later, my husband told me that he said he was sorry because they had left something in my abdomen again.

“When they took me to the theatre, the doctor in charge of the operation told me the anaesthetist in charge was not there so they decided to do the operation. I kept screaming as he cut open into me…,” she said.

Unfortunately, the husband divorced her after all these surgeries:

Watch the lady narrate her ordeal below: