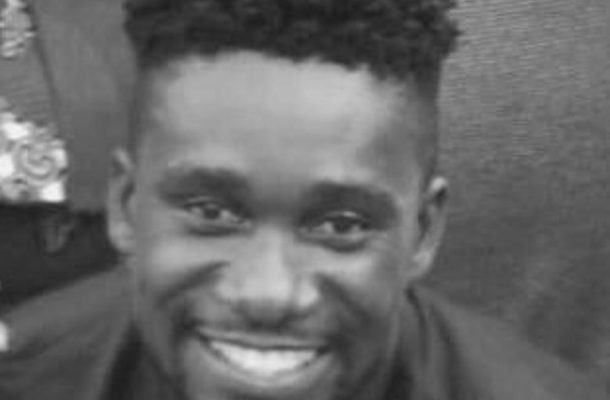 “After about 30 minutes, he woke up with some force and the blood just flew like … you know, when water pops out of a water hole, the blood just came out puuf…”.

Those were the words of Yaa Tina [not her real name] when our team caught up with her to listen to her story.

Yaa had gone to visit her boyfriend, Little the Gym Instructor she had been dating for almost four years before that God-forsaken night which turned out to be the last night they will ever be in each other’s arms.

Shortly before Little’s bright life was snuffed out, Yaa said she had seen a shadow through Little’s bedroom window and had alerted him but he calmed her, saying it could be cats playing around the window.

Yaa said she doubted the ‘cats playing’ theory as she thought it was the shadows of, what she called, bad boys wanting to catch a glimpse of what may be happening in their room.

Before this moment, Little was in the washroom while Yaa lay on his bed, waiting for him to see her off as she did not plan to spend the night with Little.

Yaa said, even though her deceased lover calmed her, she saw him grab a kitchen knife so she went back to bed.

Shortly after, Yaa said she heard the sound of a key.

“The next thing I heard was a key crack and I heard ‘who is that’ in Twi. At the same time, it was like someone trying to push the door as Little also tried to push back then I heard a gunshot,” she recounted.

As Little screamed with his hands on his chest, Yaa said his attackers pushed him into the bedroom with guns pointed at both of them.

Yaa, who at this time had rushed to her boyfriend’s rescue, said she was pushed back onto the bed with a gun to her head.

The demand for phone and money

The attackers, numbering three in the room, then demanded their phones and money, a demand to which she obliged.

Yaa said they didn’t have enough money except for some GHS 100 and coins that the deceased had left on a table which the attackers had already picked.

With the two phones in their possession and not much money as they thought they could grab, they departed the room, Yaa narrated.

At this time, Little was bleeding and Yaa said she grabbed a bedsheet to block the flow of blood when the attackers had left the room.

While doing so, Yaa said she screamed for help, an act that brought one of the attackers back to their room to warn her against screaming.

According to Yaa, when the attackers left Little’s room, she could hear them talk as they entered other neighbours’ rooms.

“I heard them bring someone out and instructed him to open his car,” she recounted, saying at this point she had gone to lock the door as the attackers walked around shouting instructions to each other.

“I heard the name Awuro, Awuro,” Yaa said amidst tears.

All this while, Yaa said she stuck to her frantic attempts to block the flow of Little’s blood but after 15 to 20 minutes, she noticed a pool of blood oozing from his back onto the floor.

“I noticed it [the blood] wasn’t small so I panicked and started screaming again and after some time, he just stood up; got up at once and the blood just flew like … you know, when water pops out of a water hole, the blood just came out puuf…” then he started hitting everything around”.

At this point, Yaa said she got scared even more so she ran back to the door and started knocking and shouting for help from neighbours but there was no help in sight as she believed everyone was afraid.

As all hopes for help failed, Yaa could only sit helplessly beside her lover until his struggles stopped.

According to Yaa, minutes after the long silence that had engulfed the entire house was over, she heard another set of voices and as she paid attention, she realised it was the police who wanted to know if she was okay.

By the time the police got to her, however, Little had given up the ghost.

Rumours of Little’s affair with a married man

“I’m not married; I’ve been divorced for almost eight years now. I’m with my kids and my ex-husband is also staying at his place,” Yaa said as a response to our question to her about her rumoured extra marital affair with Little.

If I said I have been with Little for the past four years, it didn’t start with a sexual relationship. I was going to the gym when I had this divorce and all of you know divorce is not an easy thing. Sometimes, while working out, my mood will just change and I’ll start tearing.

According to her, Little noticed her struggles and they became friends as he consoled her, leading to the two of them developing a liking for each other.