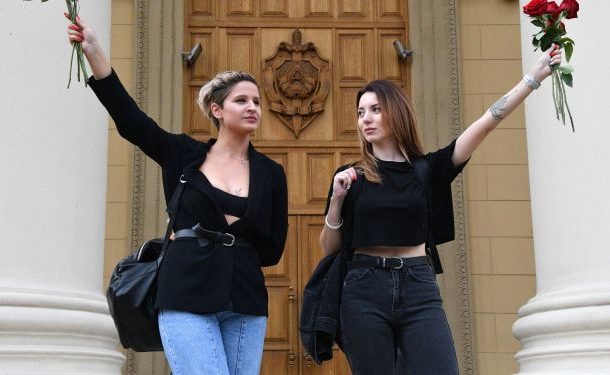 Last weekend, up to 1,000 protesters, most of whom were women, gathered in the centre of the Belarusian capital to protest against police violence during the initial days of anti-government rallies across the country.

Up to 4,000 women have reportedly gathered on Saturday in Minsk, the capital of Belarus, to hold a protest against police brutality called the "Women's Peace March".
The activists are carrying red and white flags, the same as the official state flag in 1991-1995, as well as the banners of other states to show their appreciation for all the support for Belarus. Many of the women have reportedly brought children with them.

​Cars passing by are honking in support of the rally.

Earlier in the day, Belarusian police stated that they had arrested some 30 people who took part in several protests that were held on Saturday.
Opposition protests have been held across Belarus since the 9 August presidential election, which saw Lukashenko re-elected for a sixth term.
While according to the electoral authorities Lukashenko collected over 80 percent of the vote, the opposition has insisted that Svetlana Tikhanovskaya, an opposition candidate, won the election.
The initial days of the demonstrations were marked by a tough police crackdown, but law enforcement officers have since halted their excessive use of force.