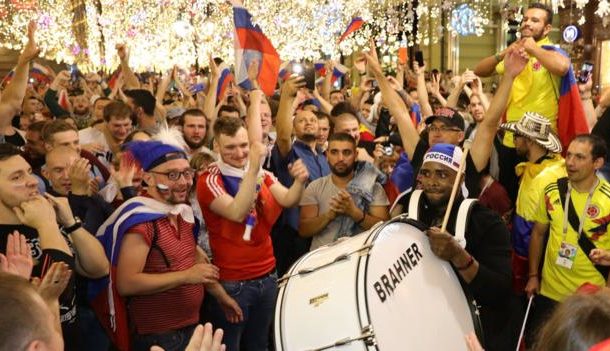 When Andrei smiles at you he means it. He showed me his fake smile and it was not pretty.
"The thing with the Europeans, they're cold people," he says. "They are not sincere. But we Russians, we are welcoming. And we are sincere. Go on and tell your friends about that."
It was supposed to be dangerous and inhospitable. Some said it was a risk to travel to this World Cup where every English fan would be targeted as the enemy.

Talking with Andrei, a security officer from Samara who loves fishing and has the photos on his phone to prove it, was like speaking to so many other Russians aware they had been getting a bad press.
So much of the build-up to the tournament was dominated by negative coverage in the UK, especially after relations with Russia fell sharply following the poisoning of ex-spy Sergei Skripal and his daughter, Yulia, with nerve agent Novichok, which the UK government blames Russia for.
And although the problems between the nations may well remain unresolved, the World Cup has been a huge success.
On the pitch the football has been brilliant - only one goalless draw and a series of shocks and captivating matches.
Off the pitch there have been countless individual acts of kindness and curiosity. Over four weeks since the opening match on 14 June, Russia has been enjoying a huge party - and those who took up the invitation have been having a wonderful time.
They have seen a side of Russia many might have missed had it not been for the football. They have met people they would not have encountered, and have been welcomed and celebrated by them.
I saw Russian mothers throw their young daughters forward for selfies with the remarkable Peru fans who travelled in such numbers and with such warmth and optimism.
In Samara - a closed city until the collapse of the Soviet Union in 1991 - Brazilians celebrated late into the early hours of a Tuesday morning as rows of amused police officers leaned in but politely refused invitations to join them.
Even if their teams have not performed, colourful supporters from all over Latin America travelled en masse and attracted admiring smiles everywhere they went. I lost count of how many times I overheard in the street: "Let's go and take photos with the foreigners."


A Brazil fan after his country were knocked out by BelgiumThe good feeling has come both ways. On my way to Sochi, the day before the opening game, I watched as a portly man carrying too much fishing gear through a Moscow airport dropped a small item on the floor.
He leaned gingerly downwards, balancing his tilting equipment, before an Egypt fan stooped down to help pass it on, risking his homemade pharaoh headgear in the process.
There was a brief acknowledgement but it was something that maybe lingered longer in both men's minds. Something totally out of the ordinary was just beginning.
In short, the people who travelled here from all over the world discovered a place very different to what they might have expected.
Having got to know Russia well in previous long stays here, I had a feeling it would be like this. Russia loves to throw a party and to show its best to the world.
The 1980 Olympics are still remembered dreamily in Moscow, while the 2014 Winter Games, tainted by evidence of state-sponsored doping in Sochi, was another time for the nation to rally round, tell stories about itself and listen to stories from elsewhere, despite what emerged soon after.
Once again the country has been out to make memories of an extraordinary time, a magical four weeks only made more magical by Russia's run to the latter stages against all odds.
My time here was spent travelling around Moscow, Sochi, Saransk, Nizhny Novgorod, Ekaterinburg, Kazan and Samara. I did not encounter many England fans - largely because I did not coincide with their games.
But it is true they were not here in the vast numbers of previous tournaments. Before the opening match on 14 June, football's world governing body Fifa said 32,362 tickets had been sold to English fans, compared to 57,917 at the same stage in 2014. In Moscow's Spartak Stadium, there were so many more Colombia fans it might have been a last-16 tie played in Bogota.
The memories of Euro 2016 and the widespread focus on Russia's alarming but minority hooligan scene were likely to have been the biggest factors in people's reasoning not to travel this time.
The kind of violence we saw in Marseille has been thankfully absent during this tournament, owing seemingly to the arrangement of a temporary peace between known offenders and the authorities, enforced by the threat of strict punishments and a big police presence.


Clashes broke out at the end of the match between England and Russia in Marseille two years agoThose who did decide to come will have been able to see the country for themselves and make up their own mind on whether those people, for whom fighting seems like a religion, represent more than the fringes of society.
In many ways, Russia was the perfect World Cup host. A vast country where there is so much to uncover. The organisation was superb, thanks in no small part to the thousands of volunteers who helped visitors get by.
And the Russian summer is something special again, a time when life seems to burst unpredictably from all directions.
There were homegrown watermelons sold from the boots of old Ladas, spontaneous night-time gatherings on leafy, potholed roads with no street lights, a time for smart rooftop terraces fashioned from the decay of old Soviet tower blocks.
Combine this with football, which brings people together like very few things can, and the recipe was complete for a unique experience.
There is of course one big reason Russia remains so relatively unknown, or why to many it remains so mysterious: the Cold War. Plus the more recent history that has continued or reopened a divide with many western countries.
Conversations with ordinary people about this - and I had many here - touched on the annexation of Crimea, the conflict in Eastern Ukraine, the poisoning of Sergei and Yulia Skripal, chemical weapons in Syria, the evidence that says Russia ran a sophisticated doping programme in sport between 2011 and 2015.
The outcomes of those conversations varied. Some would agree that Vladimir Putin's Russia is now and will be for who knows how long a democracy in name only with a bad human rights record and worrying levels of corruption and intolerance.
Others would disagree - especially on the issue of expanding Russian territory in the Crimea - while there was most often a third ending: where politics comes second in any meeting between ordinary people.
Maybe the most telling example of this was with a taxi driver, Dimitri, in Ekaterinburg.
When he found out I was English he started to reel off question after question about what people in the UK really thought of Russia.
Was it true what they said on the news? Do we really think bears wander the streets? Are the British really the enemy they are sometimes portrayed to be in Russian media?
I told him that I thought many people in Britain knew very little about Russia, but that hopefully this World Cup will have been an opportunity to find out more.
And no, we didn't really believe the stuff about bears.Source: bbc.com