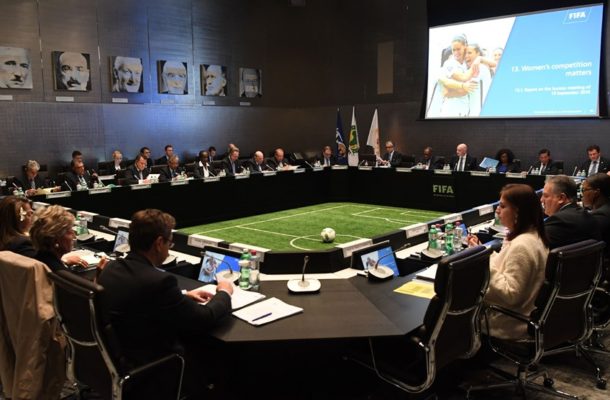 Countries in Europe and Asia will not be able to bid for the 2024 World Cup, it has emerged.

This comes after the Executive Council, the highest decision making arm of world football governing body FIFA, decided that the confederations of UEFA and AFC should not submit bids anytime soon due to their wins for 2018 (Russia) and 2022 (Qatar) respectively.

This new development has left North America favourites to win the rights to the 2026 tournament, with the U.S.A especially standing a strong chance of getting the honour for the second time following their hosting of the 1994 tournament.

It also means Africa could prepare another bid and stand a chance as the competition has been significantly toned down, but it remains a difficulty for the continent to present a viable candidate to match that of South Africa from 2010.

The FIFA World Cup, since its inception in 1930, has seen Europe host it for half (10) of its 20 tournaments so far. South America has had the honour six times, North America two times, while Africa and Asia have had one apiece.

FIFA's reconstituted Executive Council, of which Ghana FA President Kwesi Nyantakyi is a member, met for the first time on Friday in Zurich to start making key decisions regarding the future of the World Cup among other issues. READ ALSO: Why is Latif Blessing not Ghana's Rashford? The tale of two prodigies with different national recognition

Meanwhile, the 2026 tournament is very likely to feature an expanded format.

FIFA President Gianni Infantino assumed office in February with a campaign promise to increase the number of World Cup participants from the traditional 32 to 40. This month, however, the 46-year-old has been in the news after revising his stance, saying he would like to take the slots up to as much as 48.

At the Executive Council meeting on Friday, it was agreed that FIFA will consider the proposal for expansion, and that a decision could be reached at the next meeting on January 9, 2017.

"The feeling amongst the council is rather positive towards expansion,» said FIFA president Gianni Infantino said.

The Swiss-Italian went on to offer a defence for his advocacy. «When a team qualifies for the tournament the whole country is in football euphoria,» he began. "More youngsters want to play the game, companies want to get involved in sponsorship and the benefits to football as a whole are immense. In a 48-team format, the quality would be higher because the 32 teams would have a play-off. The quality would improve and not decrease in any way."

The BBC reports that the 2026 tournament is likely to take place in one of the following formats:

Many have criticized Infantino's plans of seeing his expansion campaign through.

Former England star and BBC Football Presenter Gary Lineker has been among the critics, expressing his disappointment at attempts to 'destroy' the World Cup.

He wrote on twitter: "Come on Mr Infantino! You have a mandate to look after football's best interests, not your own. Do not destroy the World Cup! Please."

Confederations like CAF are however expected to welcome and push for the expansion as it could mean more representation, which will in turn mean a change in fortunes following years of complaints regarding the inadequacy of its five slots.