Yamin is a disgrace to Ghana - Nana Boakye 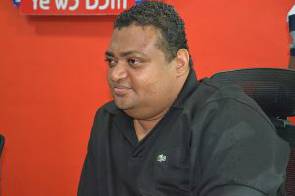 A Communication member of the opposition New Patriotic Party (NPP) Henry Nana Boakye popularly known as Nana B has described a Deputy Coordinator of the National Disaster Management Organization (NADMO) Joseph Yamin a disgrace to Asanteman and Ghana as a whole.

Nana B alleged that Mr. Yamin caused his own party to lose votes in the Ashanti region due to embezzlement of funds at the former’s workplace, the Sports Ministry during the infamous 2014 World Cup in Brazil.

Speaking on Abusua FM’s Abusua Nkommo hosted by Kwame Adinkrah, he said it was unprecedented to witness a Deputy (Mr.Yamin) and his boss being sacked at a go.

‘He disgraced Ghana during the 2014 World Cup in Brazil, look out how they messed Ghanaians up, Kwaku Boahene on Fox FM accused Yamin of squandering tickets money, a section of Ghanaians were mad at him, the situation worsened when he became the Deputy Ashanti Regional Minister, he disgraced the whole Asanteman, he and his boss were sacked, have you witnessed this before where a deputy and his boss are shown the door due to negligence, party members who were angry with Yamin reported him to the president to be sacked,’ he claimed.

Mr. Yamin on Abusua FM accused the NPP of scheming to boot out its Ashanti regional Chairman Bernard Antwi Boasiako alias ‘Chairman Wontumi’ for squandering money donated to the party in the region towards the 2016 elections.

He claimed Chairman Wontumi will be replaced by an NPP guru as Campaign Chairman, a role he has played since his appointment as a member of the team.

But a livid Nana B indicated that Yamin should be the least person to comment on issues regarding embezzlement having had an enviable record in a similar instance.

He admonished the ruling National Democratic Congress (NDC) to desist from tickling itself of winning seats in the region, urging Ghanaians to vote massively for the Flagbearer of NPP Nana Addo Dankwa Akufo-Addo in the December polls to change the fortunes of Ghana.

‘We will unseat them of their four seats in the region, their one million votes target is unachievable. I don’t know if they want the president John Mahama to know that they are indeed working by feeding him false hopes, there is no doubt that the president has failed in the region, which kind of development have they undertaken that we have not done before, they should stop deceiving themselves, because we are working assiduously to win the elections,’ he explained.

He said it is the wish of NPP that State purse will be protected from corrupt officials.