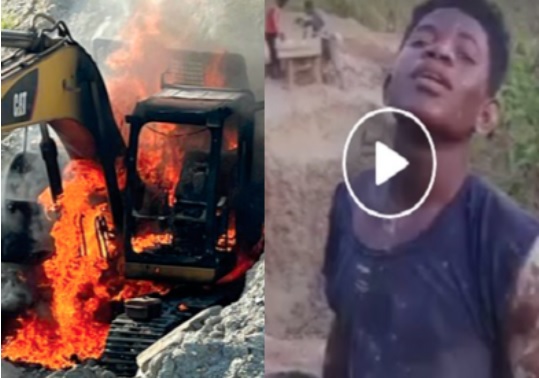 In the wake of the brouhaha surrounding the burning of excavators as part of the government plans to clamp down on the activities of illegal mining in the country, a teenage Ghanaian boy has indicated nothing can stop him from his pursuit for galamsey money.

It will be recalled that government in its second approach towards galamsey fight, launched an anti-galamsey task force - the ‘Operation Halt’, to remove all illegal miners and their logistics from the country's water bodies.

Since it commenced operations, the task taskforce has destroyed excavators, changfans and water pumping machines among other mining equipment.

The exercise has however faced a lot of criticism as it has heightened the debate on whether or not the decision to burn the seized equipment, particularly excavators, is appropriate or not.

President Akufo-Addo has justified the burning of the equipment and challenged persons who disagree with it to go to court, but that has even muddied the waters further, with some questioning the legality of the action.

In a video making the rounds on social media, a boy is heard slamming Nana Akufo-Addo that he [the President] can be successful in his decision to burn excavators but he cannot burn his hands, which could also be used to dig the grounds for galamsey.

He lamented that there is hardship in the system and that until the President opens more jobs for the youth, illegal mining will still go on.

"Look, we have more money, whoever you are, we receive better pay than you. You take 20cedis a day but I go home with 10million, you and I, who has more money, it's me. See [pointing to a used plastic bowl], when we come to work, it is fast food that we eat but you sit in your homes and make noise," he bragged on live camera.

"Akufo-Addo should get away, we'll continue to eat rich, if he really wants us to stop, then he should open jobs. If they are burning excavators, you can't burn my hands," he slammed.

Watch the viral video below: