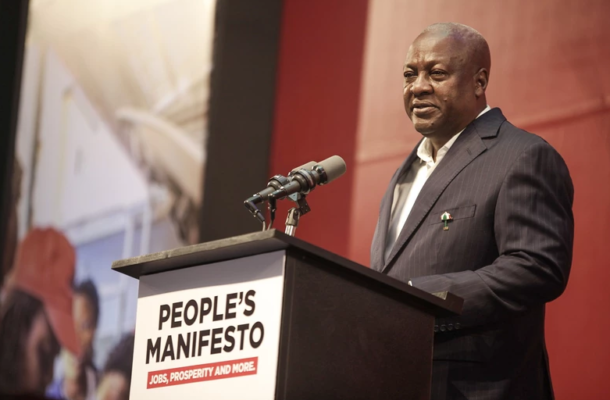 Former President John Dramani Mahama has taken a swipe at the governing New Patriotic Party (NPP) of stealing and implementing his ideas captured in the manifesto of the National Democratic Congress (NDC).

Addressing a gathering at the Town Hall Meeting on the NDC’s ‘People’s Manifesto’ the presidential candidate opined he was not worried the NPP was stealing his manifesto promises.

He was optimistic the NDC will win the 2020 general elections and taker over the seat of government and manage the economy better.

The NDC he said will provide a leadership that will create opportunities for prosperity to be for all and not just a selected few.

Mr. Mahama accused the NPP government to collapsing businesses instead of creating jobs.

The NPP he said has failed to pay contractors and this has caused several of them to be out of business.

"Some are dead, some have been struck with stroke, others have had their wives divorced the. Several others have also laid off their workers. This is only for the construction sector. In the banking sector, over 300 institutions have collapsed. We should not only think about the customer of these banks but the workers who lost their jobs.”

He reiterated his commitment to pay all customers of all the collapsed banks in full.