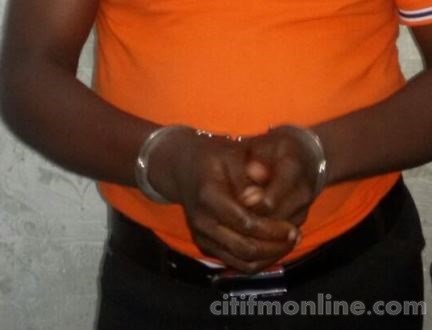 A 25-year-old man, Edward Donyiri, is in the custody of the Mountain View Police Station following his arrest over suspected robbery by some youth of the Pantang Village in the Greater Accra Region, on Friday afternoon.

One of the youth  told the GNA that they heard continuous banging on the door of a house along the main road, and discovered that one of the doors had been split. They therefore surrounded the walled house and requested the occupant to come out.

He said Donyiri, consequently, emerged from a room with a bag, but then jumped the wall and took to his heels. The group, subsequently chased and arrested him, with his bag.

He said when the bag was searched, a knife, a pair of pliers, screwdriver, four mobile phones, a charger and a internet modem were found. The Police said Donyiri after investigations would be prosecuted. There have been reports of rampant robberies in the area during the day, the Police said.