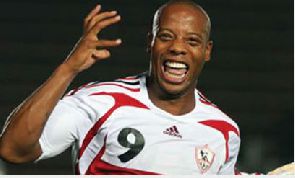 Egyptian giants Zamalek are facing a huge distraction ahead of this weekend's CAF Champions League as FIFA has ordered them to pay Ghanaian striker Junior Agogo 557,000 Euros or face a six-point deduction in the league.

The Cairo-based team take on South Africa club Sundowns in the first leg of the final on Saturday but the order from FIFA to pay their former player is threatening their concentration for the match to be played in Pretoria.

Agogo made a shock move to Zamalek from English side Nottingham Forest in 2008 after his impressive showing at the African Cup of Nations on home soil despite strong interest from top clubs in France and Turkey.

But nine months later Agogo terminated his contract over unpaid salaries and reported the club to FIFA, before the Court of Arbitration for Sport ordered Zamalek to pay Agogo 807‚000 Euros.

Zamalek chairman Mortada Mansour claims they have already paid 250‚000 Euros but the Egyptian FA will carry out the six point deduction if monies owed the former Ghana striker are not settled by the end of next week.

“Zamalek is being threatened with a six-point deduction in the coming period if the situation is not resolved.”

Zamalek have had their assets frozen over a dispute with their former chairman Mamdouh Abbas and they say they have been unable to Agogo because of the dispute.

“Agogo’s money is still with Mamdouh Abbas‚ the government has frozen the assets," Mansour claims.

"I was supposed to pay the seventh installment of Agogo’s dues‚ but Mamdouh Abbas froze Zamalek’s assets so now we were unable to pay him.”

The news is an unwelcome disturbance for Zamalek and their players as they will have minus three points if the EFA carries out its threat of the six-point deduction for the new season.