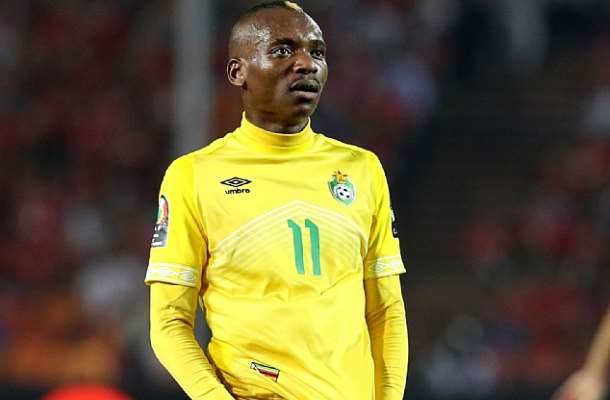 Zimbabwe's poster boy Khama Billiat has drawn the curtains on his International future after retiring from International football with immediate effect.

The 31 year old Kaizer Chiefs attacker took to his twitter handle to officially announce his retirement from the warriors of Zimbabwe.

The Kaizer Chiefs star featured for the Warriors during their failed 2022 FIFA World Cup qualifying campaign and was expected to take part in the Africa Cup of Nations in Cameroon next year.

The 31-year-old former Mamelodi Sundowns player made his senior national team debut against Mali in a Africa Cup of Nations qualifier back in 2011 and has gone on to represent the Warriors at the continental showpiece.

However, Zimbabwe will have to make do without their talisman, who boasts more than 50 caps to his name, after he penned an emotional farewell to the international scene which was shared across his social media accounts.

"It was all a dream. When I was young, I always dreamt of representing the country, playing for the national team," Billiat said in a statement on Monday. "The dream which seemed far-fetched for a young Khama in Mufakose came when I least expected it.

"The first day I donned the Warriors badge, I vowed to enjoy myself and always lift the country's spirits. Scoring a goal at the Africa Cup of Nations finals is one moment I still relive in my mind even up to date.

"It is one of the special moments I have experienced wearing the coveted yellow jersey. The feeling of scoring in a packed stadium for your nation is inexplicable.

"I have met so many teammates, coached at the national team and I appreciate every relationship I have built along the way. By playing for the Warriors, I have improved immensely as a player [and] it is an opportunity I will forever cherish.

"However, every story no matter how beautiful has an ending. This is probably the heaviest decision I have ever had to take in my life, but it is a decision I make with a patriotic heart.

"Like those who had to pave way for our generation of Warriors stars to emerge, I have decided to retire from international football. I believe it is now time for me to pave way for new talent to blossom and serve the country in the same way that I did, or even better.

"I will forever be indebted to those who took chance on me and moulded me into the international player I grew to become. Thank you, Zimbabwe for supporting me and my teammates, for showing love with each outing. God bless you."